Books that make me feel dumb automatically go on the DO NOT WANT list.

I was challenged to read Anthem on on 1/22/12. And although I didn’t meet the deadline to get my review up (missed it by, um…more than a year), I did read it within the required time. Maybe I should just backdate this post and pretend it’s always been there. I could act all offended that Michelle never commented on it if she ever asks about it.

Anyway, I can’t review classics, it’s too much pressure! Especially classics that I…don’t really get. So please accept this chatlog instead. And a picture of a puppy. 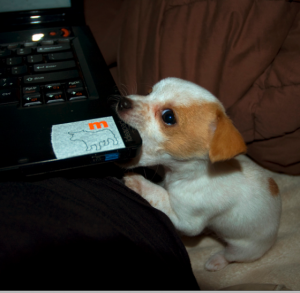 Kelley: So I got to the last word, went “wha???” And then decided I didn’t care enough to wonder anymore
EGO? wtf? did i miss something?
Michelle: Ego doesn’t just mean ego
Kelley: then…what does it mean?
Michelle: Ego actually is a Latin root that means I or “the self”
Also, it’s a better sacred word than I because it has the additional connotation of Sigmund Freud’s psychological Ego
Kelley: But
Are we supposed to be that well-versed in freud?
Michelle: Yes! Ayn Rand was
Kelley: But i’m not!
And your school kids aren’t!
Why do I need a manual to read this book?
Michelle: so…anyway, it’s about Equality now being ALL about the self and nothing else, INCLUDING society, Liberty, or his own KIDS meaning anything to him
he’s standing on top of a mountain and all veins run to him (the brain) and they all depend on him and HE gets to decide what they know
I has now become God essentially
he doesn’t even teach liberty to READ
Kelley: He’s just not crazy brainwashed anymore, he becomes normal
Michelle: well, according to Rand’s philosophy he is…
i thought that too the first time i read it
Kelley: So we’re supposed to come out of that thinking the government was right and he really IS evil?
Michelle: but then read the last chapter again, knowing what you know about her/him and it takes on whole different meaning
YES and NO
She is replying to communism and a crusher of souls and minds (like his society at the beginning)
Kelley: I liked the first meaning better. That was a happy ending
Michelle: he is the self we all want to be…that he is trying to find knowledge and improve himself to find happiness and satisfaction
I didn’t get it at first either until I read it a couple times
but it works as just a story, not a philosophy
Kelley: I’m not cool with this
Michelle: Unfortunately, her philosophy, which says all humans are god to themselves and nothing else matters, also doesn’t work because they end up needing something outside themselves too..like equality did…knowledge or liberty or whatever
nothing about him is original…that’s why he is just as clueless as before
Kelley: what?
Michelle: he is going back to steal the ones who are good enough from his old place
Kelley: which is good, he’s saving them from the evil government
Michelle: but Equality, thinking he’s now god, doesn’t realize that he’s flawed and unoriginal…but he’s essentially creating the same world all over again…only the privileged have knowledge and he gets to decide who they are
Kelley: how did you get that?
Michelle: reread the part about standing on top of his mountain
Kelley: he was going to bring the people he thought were worthy to his new world and give them knowledge and save them
he can’t save ALL of them
I don’t even remember a mountain
Michelle: he won’t even teach liberty to read, she still works the fields, and she should be special to him
Kelley: and he won’t teach her to read? why not?
Michelle: nope, he tells her what he wants to know
Kelley: she still works in the fields?
Michelle: yep, she’ll be the one who feeds his society because that is all she is good for. that, and sex, i guess
Michelle: she’s vain and not smart and thus, unimportant
someone has to feed them
that’s her contribution…it’s all he’ll let her do
Kelley: i do NOT remember this
Michelle: he names her and tells her stuff but won’t share any info…
Kelley: guess i’m gonna have to reread this stupid book
Michelle: her name, Gaea, is where you infer that
Kelley: ohhhhh
Michelle: she is the earth mother (the one who feeds and sustains life…and babies)
Kelley: so he didn’t actually say that she’s still going to work in the fields and he won’t teach her to read then
i thought she didn’t care to read
Michelle: could be…still makes her less elite then he is
less knowledgeable, and in his eyes, less worthy
Light=knowledge=power, that whole idea of “Shedding light on a subject” or “Bringing someone out of the dark” are euphemisms for making people less stupid
i thought it was boring the first time i read it…or just so-so…but there is so much more going on than it first appears
THAT i like
Kelley: I hate this book

Like Loading...
This entry was posted in Classics, Uncategorized and tagged Anthem, Ayn Rand, classics, I feel dumb. Bookmark the permalink.