And Then There Were None by Agatha Christie

So, I’m highly offended that this book was originally called Ten Little Niggers. I guess that title was eventually (and rightly) deemed too offensive, so they changed it to the marginally (?) more politically-correct Ten Little Indians. Some time ago apparently, the publishers ran out of groups to ostracize in their reprints, so they simply decided to move the whole shebang to fictional “Soldier Island” and call it And Then There Were None. 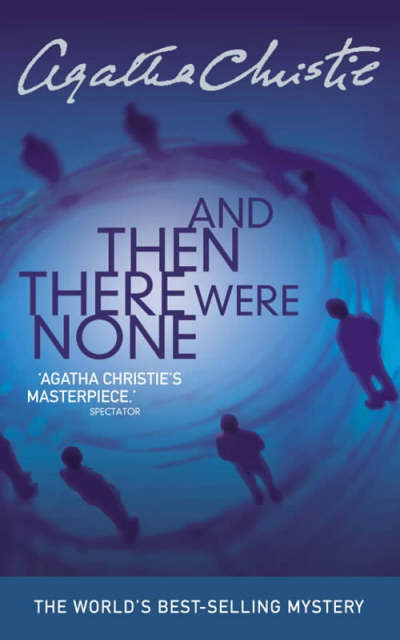 I mean, I know this Agatha Christie mystery was written some time ago, but really? A book that uses such an offensive childhood rhyme for its premise seems weak and uninteresting at best. I’d heard good things about it from a few teachers, though, and I was surprised to find it on the approved reading list at my school. (Hmm, this leads me to wonder AGAIN if the compilers of said list ever read or know ANYTHING about the works they select…it seems our county has gone the opposite of the “banned books” route; apparently we only select works with topics that are somewhat troublesome to discuss with all too perceptive teens. I’m no fan of keeping books from kids who want to and should be reading, but man, we’ve picked some doozies. And as a teacher, discussing such topics honestly with kids can become uncomfortable…Still, I digress.)

So, we’d been thinking about adding another book to our repertoire, preferably a mystery or classic, so ATTWN was a maybe. Overall, aside from the inherent problems with the title, I’d have to say this was a resounding snore. I guess maybe at some point it was groundbreaking stuff, (the novel cover claims it is the best selling mystery novel of all time), but for an occasional mystery reader like me, it felt predictable and overdone. The mystery was not compelling enough to keep me reading. The rhyme and the china figurines weren’t prominent enough to drive home any attempted symbolism. The clues were neither obvious enough to stand out (good for novice student readers) nor obscure enough to keep me guessing (or engaged). The discussion of the “red herring” felt forced.

While I wasn’t sure while reading who among the ten shady characters stranded on the island was the killer, I also didn’t care. It seemed that being murderers or at the very least complicit in “accidental” deaths, they all deserved to die, so why did it matter who was picking them off one by one? Not worth the time, although I’ll probably pick up one of Agatha Christie’s Hercule Poirot or Miss Marple mysteries before writing her off entirely.

Like Loading...
This entry was posted in Mystery, Random Rants and tagged agatha christie, mystery. Bookmark the permalink.