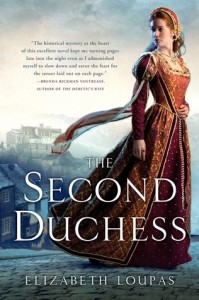 So yeah, The Second Duchess is based on a poem by Robert Browning. The poem is thought to be about Lucrezia de Medici, the young wife of Alfonso de Este, who died at age 16 in 1561, and describes Alfonso talking to the Austrian embassador about how his first wife had flirted her way around the court and he’d eventually killed her from jealousy. I’ll admit, while I enjoyed the book, when I got to the end and read the poem, and the story behind the poem and a little backstory from the author, I started liking it MUCH MORE.

The Second Duchess follows Alfonso’s new wife, Barbara of Austria, and her quest to discover if the rumors are true that Alfonso killed his first wife. It was really a mystery book, which I generally don’t choose, but it worked out well for me. One thing that surprised me was the footnotes at the end of each chapter from dead Lucrezia’s point of view, where she hinted at who had killed her and revealed her spiteful character. Was not expecting ghosts in this book!

The Second Duchess, despite being not at all what I expected, was a solid read, and is bumped up about a zillion points on my scale just for the poem tie-in, which was COOL.

One Response to The Second Duchess – Elizabeth Loupas