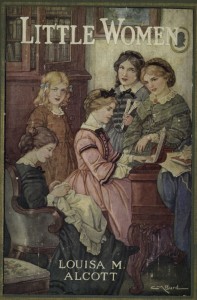 So, I loved this as a little girl, and decided it was time to try it as an adult. I was shocked to find that apparently I’d never actually read the original and instead had just read a VERY abridged child’s version. I mean, I always wanted more to the story, but didn’t really know WHY. (I guess even as a kid I hated abridged anything…I don’t like when people keep secrets from me, especially in books!) I guess I SHOULD have known, because the little pocketsized version I have is 236 pages and every other page is a drawing, so we really only have roughly 100 tiny pages of text, but still, the full version was such a surprise.

What a revelation to find out that THE MAJOR shocking moments I never was able to get over when reading it as a kid  (think dramatic moments with Beth, with Amy & Laurie, etc.) are actually not even a part of the original book! They were part of a sequel to Little Women called Good Wives and were later (and more commonly) published together with it as one standalone novel.

And all I can say now, is WTH, LMA??? What the total hell are you doing to me? I mean, in the adult version, I can clearly see that Beth has to die because she is too good and perfect to be real and has no role other than to function as a sort of angelic figure. She just hangs out in the house taking care of folks and HAS NO OTHER PERSONALITY. To heck with Good Wives, if I just read the original Little Women, sure there is a lot of moralizing, but I can leave Beth weak but alive (and under the care of a doctor, dammit) and leave Jo and Laurie comfortably flirting since they’re clearly meant to be together. NO. I just will not buy pampered but pretty Amy as a love interest when there is a firebrand with a brain, our dear Jo, around.

Anyway, I was shocked when the original Little Women ended with Beth whole but tired, Meg waiting patiently to marry John Brooke once he gains some money, and the rest just doing more of what they had been, albeit with Mr. March at home. And that is SUCH a disappointing ending! It is no wonder they combined the next part in with the original, but I still prefer my Little Women to be FOUR girls, thankyouverymuch, so I will get over the ending and just pretend that Good Wives never happened. 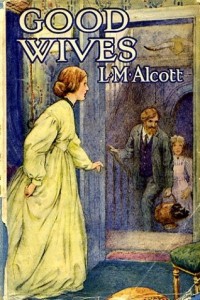 Good Wives: (Or Little Women Part Two)…So I have major complaints about this one (and I HOPE that it isn’t that the previously serialized Little Women got too much editing from her publisher). Mostly, I am annoyed that while they call the damn doctor when Beth has scarlet fever in the first section, apparently they do not for a daughter that has just made up her mind to die. I mean, not once, no doctor is called in, not for this EVER. BETH JUST DECIDES SHE IS GOING TO DIE BECAUSE HER NEEDLE IS TOO HEAVY AND THEY ALL JUST LET HER. She isn’t even DIAGNOSED with anything. Does she have cancer? Consumption? Apathy? What the heck does Beth even die of, Mrs. Alcott? Do you even know? 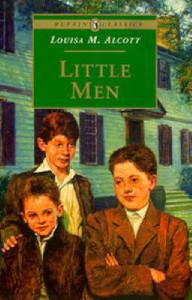 Little Men: I never read this one as a kid, so my feelings are strong and current. I have to say, I did like that this sequel to LW allowed us to see more of Jo, but I didn’t feel like it was a satisfying story for where the March girls would end up. I didn’t want Jo to be with old Mr. Bhaer so the whole book feels wrong. I also don’t see spirited writer Jo giving up on her dreams to take care of a houseful of boys who are not her own in the house she inherited from old Aunt March (who always liked Amy better anyway). That’s too much like our Beth, and frankly, Jo is too selfish and angry for it. I mean, what happened to her weakness of being impatient and impulsive? This just doesn’t seem to fit.

So once I get past that, I get annoyed because the other characters aren’t featured much. Okay, so Beth is dead, but where is Marmee? She was so much a part of the girls’ lives, she lives just down the road, and now we never see her! And why do John and Meg let their twins come live at a school for abandoned boys? THEY have a home and parents who love them! This does not make sense. I could see them visiting often, as Bess does, but what the actual hell are you doing here, LMA? Meg wouldn’t just give up her babies to Jo because Josie was born! No way. AAAAAND then we get another mysterious death like Beth’s. John Brooke just up and keels. For no mentioned reason. And he’s apparently a beloved uncle and patron of the school, even though WE DON’T EVER SEE HIM. Really? Just no. 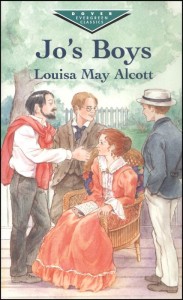 Jo’s Boys: I’d never read Jo’s Boys, so I guess I was expecting something ELSE. This short book took me three weeks to read because I just disliked it so much. There was entirely too much moralizing that creeps in too much in Good Wives and Little Men and the rest was just stories about the random boys Jo took in that I just couldn’t much care about. Jo’s Boys takes place ten years after Little Men and shows the Bhaer and Laurence clans the founders of a college on the site of Plumfield. Of course, most of what goes on in this book is a bunch of marriages and shocking diatribes on how to impress and deserve a “good” mate. I KNOW this is a classic and that much of the views on people’s appropriate actions will thus seem outdated. But where is Jo’s fiery nature and rebellious streak, Meg’s jealousy over other people’s money, and Amy’s selfish vanity? They’re all prim and proper housewives now and far too perfect to be believed. You’ve taken all the believable March-ness out of our dear girls and instead made them into nothing more than paper cutouts critical of bluestockings and self-made men. Not cool, LMA, not cool. Not a fan.

One Response to Little Women series by Louisa May Alcott