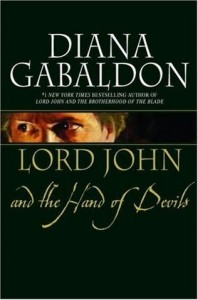 These all seem to be mysteries, which is not generally a genre I’m drawn to. I don’t entirely understand why there are so many books about Lord John, who I always considered to be a rather boring character, but Gabaldon seems to love the dude, so here we go.

It’s so weird. The storylines on these books don’t really matter to me. I can’t figure out what exactly I like about the stories themselves, since the mysteries tend to always be lacking in my opinion. But I still really, really enjoy them. The plots are so…convoluted. By the end I’m a little lost and bored and when the Big Bad is revealed I don’t even really know who he is.

Anyway, I guess all these stories are able to be read as standalone, apart from the Outlander series, but they fill the several-year gap in Voyager – there’s a point in Voyager where what we know of Jamie’s story kind of ends and is picked back up when Claire returns, and these books cover that time period. This is the recommended reading order from Gabaldon’s site, to be started after Voyager, book 3 of Outlander: 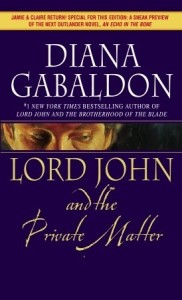 Lord John and the Hellfire Club: Set after the closing of Ardsmuir, this extremely short story involves the murder of a cousin of Harry Quarry, the guy that Lord John took over from as governor of Ardsmuir. The murder seems to be related to a gay/magic/murder club that exists in London at the time, and Quarry and Lord John seek to unravel the mystery. The story feels rushed and there’s no real…depth. The ending isn’t shocking or relieving because there’s just not enough time to get invested in any of these characters.

Lord John and the Private Matter: Ohhhhh yeah, this is definitely an english mystery, all right. There’s lots of amateur investigations of slums and whorehouses and Irish people, and Lord John running around postulating on things and saying “ergo…!” There’s a side mystery about a guy who’s engaged to Lord John’s cousin possibly having syphilis, and so Lord John kind of hilariously plots throughout the whole book to try to get a better look at his penis to be sure of the disease. The conclusion of the mystery was kind of lame and confusing and I didn’t really care by then. 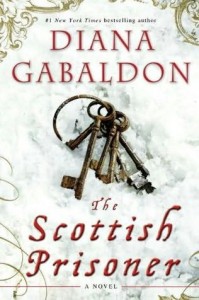 Lord John and the Succubus: Lord John’s off on campaign fighting the French, and there’s a succubus loose in the camp, killing soldiers! This one seems much longer and more fleshed out than The Hellfire Club. Lord John’s falling into a pattern though, of thinking over the mystery to himself constantly: “But if blah, then blah. But then, why did blah? Of course, then blah would blah. But then we must assume blah did blah!” Pages upon pages of that. It’s getting tiring. 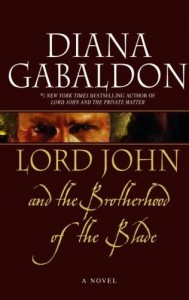 Lord John and the Brotherhood of the Blade: So, I really like the dry Englishness of these stories, mostly because of the historical context. While what Lord John does might be a tad boring, I enjoy the soothing accent of the narrator, and the little tidbits here and there, a historical term that I don’t know that when looking it up gives me a little bit of interesting information, etc. However. The mysteries themselves are the most boring things ever. Example: Gray was just informed that he’s got to investigate “a sodomite conspiracy to undermine the government by assassination of selected ministers.” Ugh. I don’t even know why I should care about that. So now there’s a “company of sodomites” that Lord John must uncover, presumably roaming London in bright makeup and flashy dresses and lisp-ily calling each other Mary (no really, that seriously happened in Lord John and the Private Matter). ANYWAY, aside from the roving band of murderous sodomites, John has got a new gay step brother, and he’s very happy about it.

Lord John and the Haunted Soldier: Lord John’s under investigation because of the cannon that blew up in Brotherhood of the Blade. And it’s complete crap. I really, really hated this one. Actually I seem to not really like any the novellas in this series, but this one was just really awful. Just, so many random people thrown at me, none of whom I cared about, a pointless but coincidentally related side story about a missing baby, basically NOTHING about the haunting, and UGH. I didn’t even care who the criminal mastermind was by the end. By the way, this is about as long as both other novellas combined. 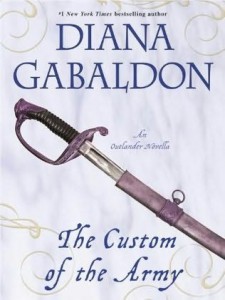 The Custom of the Army: I originally forgot about this one and started reading The Scottish Prisoner, and when I realized I was missing some stuff they kept talking about I went back and started this one. So. Lord John’s sent to Canada after a scandalous duel, and there are indians. Gay ones, of course. Lord John sure does coincidentally meet an awful lot of random gay people. Really short and nothing really happens. It seems to be just a setup for The Scottish Prisoner, really.

The Scottish Prisoner: Oooooh, this one’s got alternating viewpoints from Jamie and Lord John, that’s new! This was the best of them all for me. It wasn’t so much mystery and conspiracies by old English guys I don’t care about, but more character-building between Jamie and Lord John. There was some weird mystical/magic stuff involving ancient god spirits which kind of came out of nowhere and had no bearing on the story, though. 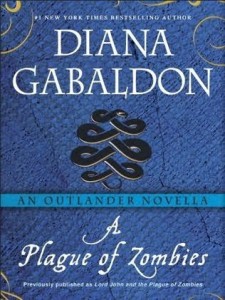 Audiobook notes: Narrator: Jeff Woodman.  He. Is. Awesome. One of the best narrators I’ve ever listened to. He does a really good job of making each character’s voice distinct (John’s cousin Olivia comes to mind, I could almost believe it was actually a woman’s voice), and he also does great on inflections. So many narrators tend to just…read the text aloud, but you can kind of tell that Jeff Woodman has read ahead and concentrated on how each line should be read, with feeling. It’s wonderful, and he’s got a bunch of other stuff that I’d like to read, like Life of Pi and several JOHN GREEN books.