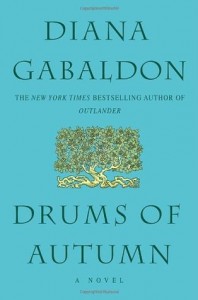 Drums of Autumn picks up 2 months after the end of Voyager, with Claire and Jamie in America. There’s the most boring and un-dangerous pirate robbery EVER, where Claire decides to A) ignore Jamie being in danger and worry about an injured dog instead, and B) do something EXTREMELY STUPID that endangers Jamie even more and then not care at all. They spend some time with Jamie’s Aunt Jocasta, who never seems to mind that Jamie killed her brother, and who seems to be getting set up to be an evil manipulator, but nothing ever really comes of it. There’s a bunch of slave stuff that has no bearing on the rest of the books. Then they decide to live on a mountain and there’s lots of stuff about building a log cabin and hunting and preserving food and making friends with Indians.

This is all interspersed with super boring present-day POVs by Roger Wakefield. Blah. And, I mean, we all know what’s going to happen there, right? There’s NO REASON for them to stay in the present.

I still love Jamie and Claire and I feel like the best thing about these books is them and their character development, but the plots are starting to slow down for me. They have adventures but they seem to be so random and don’t have anything to do with anything.

I have to mention the ridiculous scene where Dr. Claire PERFORMS SURGERY (in the 1700s, remember) FOR THE AMUSEMENT OF A DINNER PARTY and it doesn’t even occur to her that people will think she’s a witch or anything. Or that maybe she shouldn’t have a bunch of dirty people gawking at her cutting open this guy’s balls. It is…well, ridiculous.

Drums of Autumn starts this new thing where Gabaldon sort of leaves plotlines hanging for a while. I guess it’s to build suspense, but I don’t like it. Example: Jamie and Claire get some visitors, some people get very ill, end chapter. Then you have to go spend a long time with Boring Roger in the present, and when you see Jamie and Clare again…the visitors are unexplainedly gone and the sickness is, I guess, all better now, even though it was a pretty serious illness. It’s very strange and happens more than once in this book. It’s like she forgot to finish the chapter and just went with it.

Also I kind of hate Bree. The whole “fiery woman whose spirit simply cannot be contained” trope is just…ugh. It usually just translates to “woman who yells at people at the drop of a hat and insists on doing stupid, reckless things because of her “spirit.”” Claire has some of that, but not usually enough to be annoying.

Audiobook notes: I have realized that while I love the accents of the narrator, one that she doesn’t do well is southern. The slaves that have speaking parts are just…really, really bad.

One Response to Drums of Autumn (Outlander #4) – Diana Gabaldon