Chapters 11-20 – from Imprisoned at Netherfield to Mr. Collins’ Proposal

More bitching about at Netherfield. Mean girls, mean Darcy, clever Lizzie. (I’m guessing that could sum up most of the book from here on out). There’s an awesome scene where Darcy directly calls Caroline Bingley out on her plan to walk around the room in front of him so that he can watch her and fall in love with her.

Jane and Lizzie finally escape from Netherfield, where their mother has been forcing them to overstay their welcome. Mrs. Bennett, not caring at all about her daughters or how desperate she looks, refuses to let them use the carriage to get home, because she wants them to round out their stay to a full week.

Lizzie meets the “charming” Mr. Wickham, who instantly starts complaining about how mean Mr. Darcy stole all his money. Whine whine whine. So our dear Lizzie, who may not be the brightest crayon in the box after all, instantly believes him and starts to hate Darcy even more. Darcy, on the other hand, politely(ish) won’t discuss it with her or badmouth Wickham. DUN DUN DUN I wonder which of them could be the evil one?

The ball at Netherfield. Mr. Collins hilariously stumbles around like a social-climbing Mr. Magoo, expounding pompously on topics that no one cares about. Lizzie squirms with embarrassment when her entire family acts insane. 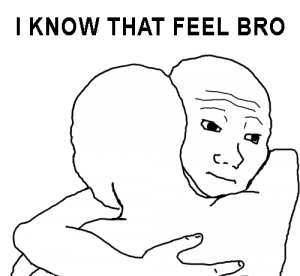 Mr. Collins tries long-windedly proposes to Lizzy, and it is perhaps the funniest scene I’ve read in a book, ever. First she tries to flee the room so he can’t ask, but her mean mom makes her stay, and he insists on “assuring her of the violence of his affection.” So Lizzy’s all “um…thanks but no.” And he’s like “oh girls are so silly, I don’t believe you!” and she’s like “…no, really, I mean NO.” And THEN he’s all “well I’m awesome, so I still don’t believe you.” And eventually she just leaves the room and figures she’ll get her dad to break the news to Collins.