First off, I don’t think I ever read Pride and Prejudice before, so I’ll be able to talk about this from a first-time perspective, yay! I’m doing an audiobook of this one, and also trying out the Audible listen + read thingy where it highlights the text of the book for you, and you can read along with the narrator. Also, I jumped at the Kate Reading version of the audiobook, since she’s the female reader for Wheel of Time audiobook. However, her British accent is much stronger for this book, and so not very familiar to me.

So, character introductions, Mrs. Bennet being a busybody, Mr. Bennet sitting around trolling everybody (hee!). We’re introduced to the horrible Mr. Darcy and the terrible Miss Bingley. Darcy stomps around being a dickhead to everyone he sees, and Caroline Bingley very amusingly throws herself at him desperately while casting dispersions on Lizzie every chance she gets. It is hilarious.

Bingley is rumored to be showing up at the first ball with 12 ladies and 7 gentleman, and no one bats an eye. Who just travels around with their 19 closest friends in tow???

When Jane is invited to go have dinner with the Bingley sisters, her mother gets all excited and makes her ride a horse instead of taking the carriage, because she figures that if it rains Jane will be stuck at the Bingley house forever. 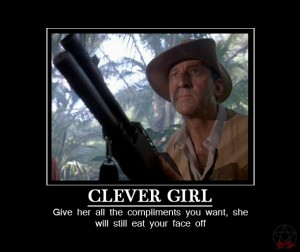 While that is clever, she also shows no interest at all when Jane actually gets sick from riding around in the rain, which makes her a really terrible mother. All Mr. Bennet has to say about it is “well when she dies it’ll be your fault,” which kind of makes him really awesome. So Lizzie goes (uninvited) to the Bingley house to take care of Jane while she’s sick, and there’s lots of yapping about how all the girls hate each other. And that’s a problem that keeps irritating me. Even though this book was written by a woman, it STILL regulates most of the female characters to catty, silly, empty-headed gossips. 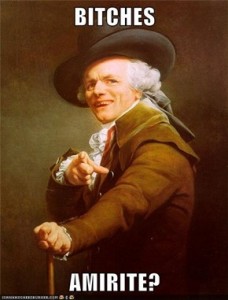 Lizzie’s a nice, sensible, clever main character, and I like her already. But Darcy, mannnnnn. I have this vague knowledge that this is going to turn into some great love story between the two of them, but from what we’ve seen so far, I don’t find it likely that I’ll able to be convinced that he’s misunderstood and at all deserving of Lizzie’s (or my) love. HE CALLED HER UGLY WITHIN HER HEARING!! Well, I’m pretty engrossed in this book so far, so Ms. Austen can give it her best shot!