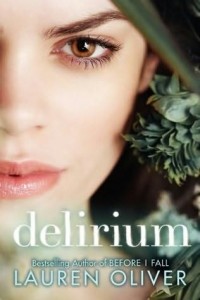 Summary: Lena lives in a future USA in which the government has decided that all the problems of the world were caused by love  – amor delirium nervosa – and has figured out a way to remove the ability to love by means of a mysterious operation. After the procedure, the people are much easier to control, and go about their government-mandated lives pretty much peacefully. Of course there are still uncured people living in the Wilds, though – outside the city fence a la the Hunger Games – who are fighting to overthrow the government.

WELL. Here’s another case of me taking my sweet-ass time to read something that everyone in the entire world says is great, and then regretting that it took me so long (the last ones being Divergent and the Hunger Games). I just noticed two things that all of those books have in common, though – they’re all trilogies (Come on, can we stop with everything in the world being a trilogy?) and they’re all DYSTOPIA. If you asked me, I’d tell you I hate dystopia and I never read it. But I’d be lying, because although I may not WANT to read dystopia, I always end up loving it.

So, Delirium. Aside from having a name that I always mispell the first time, I really enjoyed it. I thought it was a little draggy in some places, and that it didn’t really need to be as long as it was, but the premise of the book is AMAZING. Love being a disease that needs to be cured to keep everyone safe? AWESOME. I worried about the timeline of the book at first, though. At the start of the book, Lena is counting down the (90ish) days left till her love-curing procedure, and (and I’m not spoiling anything here, I think this is in the official summary) obviously she’s gotta meet someone and fall in love with him strongly enough that she is willing to throw away her current life of government control for him, all in less than 3 months. Thankfully, the story flowed in such a way that I didn’t feel like I was being smacked in the face by improbable insta-love.

Now, let’s talk about the audiobook version. Sarah Drew is the narrator, and she has a very pleasant voice, and she’s really putting her heart into the dramatization of the story. For instance, if the narration says that the character’s voice cracked while speaking a line, she actually makes her voice crack! And that’s unusual in my experience, usually audiobook narrators skip stuff like that. The thing I didn’t like at ALL about her reading is her male voices. “Male” seems to translate to “impossibly sloooooooow, lazy drawl,” and it bugged the crap out of me! Every time Alex would speak I’d be jolted out of the story. Otherwise, excellent reading.

I’m very worried about the rest of the story. I fear that this will go in the direction of the Hunger Games, with the love story completely being turned upside down and the main character becoming some kind of boring freedom fighter. I’ve accidentally read some spoilers for the rest of the series and I’m not looking forward to it at all. I’m not completely spoiled though, so it’s possible that I misread or misunderstood what’s gonna happen. I hope so.