In honor of the recent papal election as well as St. Patrick’s Day, I was feeling in the mood to do a reread of Andrew Greeley’s White Smoke. Father Greeley remains one of my favorite authors although I am not clearly not Irish or Catholic or from Chicago or anything really. Still, I find it fascinating that a Catholic priest can create such likeable characters and such completely un-priestly stories. I guess it would make sense that priests are good readers of people; I also enjoy that his works never feel preachy even though they are certainly framed on religious topics. 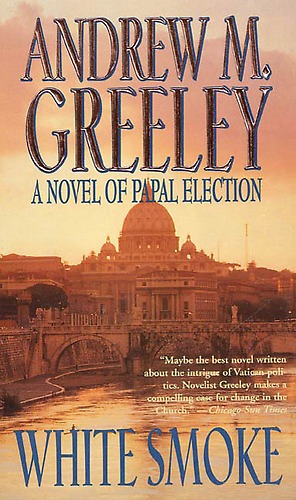 White Smoke is both a novelized projection of what a papal conclave could be like as well as a reconciliation story about two Irish Catholic journalists who are estranged but very much still in love. It features Vatican politics as well as a fair amount of sex, intrigue, and shanty-Irish wit courtesy of good ol’ Blackie Ryan. I have to say, I’ll miss the “little bishop” and Nuala Anne McGrail mysteries very much now that Father Greeley is (likely) permanently done with writing after his traumatic brain injury a few years back.

This was a quick and thoroughly enjoyable escape read.