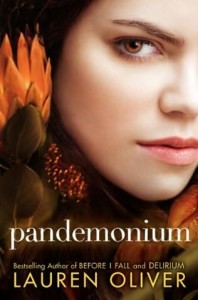 Here are some random thoughts I have about Pandemonium, some taken from notes on my kindle while reading.

It’s kind of ridiculous that, now that the “bad guy” (the Invalids) from the first book doesn’t really exist anymore, now there’s a new, never before seen enemy – the scavengers. Ugh.

I DO NOT LIKE JULIAN. I WANT ALEX BACK. NO JULIAN. ALEX ONLY. THIS IS HORRIBLE.

Julian seems like a little kid. Helpless, useless, dumb. And it’s weird how Lena keeps trying to mother him.

How are there even protestors in this society???? Wouldn’t the government have shut that down with a firm hand? In the first book, it kept mentioning that people could be executed without trial for things as mild as being suspected of being sympathizers, and now there are riots and protestings and omg it makes no sense.

Then, RIGHT after that (after them “accidentally” seeing each other naked). And I mean right after, like 2 pages later… She takes time out of being chased by murderous scavengers to reflect on how all her delirium is gone, she’s not in love with Alex anymore. But oh look, now she’s suddenly in love with useless Julian. its been like…6-9 months since Alex, the love of her life, “died?”

The storyline that takes place in the past was kind of…lame. It just ended, we never really got to a point where the past caught up with the present. And then all of a sudden the rest of the group was in Baltimore? For…some reason? They…walked there?

The whole kidnapping plot made no sense at all to me. So, it was all a setup to try to…what, make Julian fall in love with Lena and bring him to their side? And it was also a test for Lena? Do…they test everyone in the Resistance by making them get fake kidnapped? And they really couldn’t tell her ANYTHING beforehand? But they could leave her hidden knives and coded messages. It’s all so elaborate and depends on a lot of things falling together perfectly.

Sadly, I didn’t like this book as much as Delirium. That tends to skew my reviews, I know. This wasn’t really a BAD book in my opinion, it had it’s good parts, but it didn’t really live up to Delirium for me.