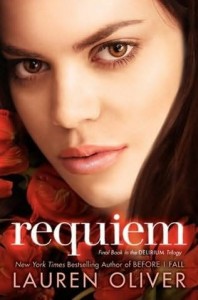 <– this girl on the cover is looking progressively manlier with each book.

I’m not really sure I have much to say about Requiem. I didn’t like it. I just feel rather blah about the whole thing, and I’m really only writing this review because I commented on the first two. I found it hard to stay focused on it and it kind of bored me.

So the Hana storyline was pointless. In the beginning she was worried that her Cure didn’t take…what happened to that? That  was just dropped.

It is rather bold to switch up each book the way Lauren Oliver did. The first was from Lena’s POV, the second one was back and forth from past to present, and this one switches between Hana and Lena’s POVs. It is also bold to attempt to make us forget Alex and love Julian. NEVER! Never never ever never. I am not as fickle as Lena!!!!

All throughout this book, I couldn’t even tell if Lena liked Julian or not. Or if he liked her, every scene seemed to feature him pulling his hand away from her or something. I guess that’s done on purpose and supposed to show how conflicted she was but…this is not even a good love triangle!

The end. I don’t think that there was a satisfying ending to this book. So they take a city. Ok…but they took ONE city. Good for them, but I feel like whoever’s running the other cities all across America will now bomb it to smithereens.

I just…I don’t like it. I was really disappointed by Requiem. Pandemonium was sort of OK, but Requiem…just yuck. I can’t think of much redeeming about it.