The Man in the High Castle by Philip K. Dick

Set in a revisionist post-WWII alternate reality where Japan and Germany actually won the war, I expected this novel to be fantastic. I knew that this story had been recently picked up as a series by Amazon, and the premise seems fascinating. Still, as much as I wanted to like The Man in the High Castle by Philip K. Dick, I found it fell woefully short of my expectations.

In this, Germany has become a superpower taking over the Eastern lands in America, has essentially razed Africa, and is now using its technological prowess to explore the only unconquered regions known to man: outer space. Japan has taken over the West Coast and created a hierarchy of classes and races with Americana-obsessed Japanese-born at the pinnacle of the “Place” standings. A buffer zone of Rocky Mountain states exists between the two former Axis allies who seem to be working against one another here in separate but simultaneous attempts at whole world domination. Superstitions and Chinese divination practices are commonly used to make decisions, black people are once again enslaved, Jews hide in plain sight to avoid detection, and Americans bow and grovel before rich Japanese investors in order to eke out a living. Overall, this future doesn’t show a pretty picture of what life COULD have been like if the war had gone the other way. Interestingly, a man in the Rocky Mountain sector has written his own revisionist tale proposing that the Allies won (although it doesn’t completely look like history as we know it); this tale-within-a-tale called The Grasshopper Lies Heavy is banned but secretly read widely throughout the regions. This subplot alone is the only part of the book I enjoyed and even that falls flat when we actually meet the reclusive author.

Full of weird syntax and awkward phrasing likely designed to show the rigidity of the Japanese nationals and infighting among the famous top generals in Germany hoping to become the new Fuhrer, I found the language of the novel itself failed to flow. While it is true that the featured assasination attempts on authors and world leaders and continued genocidal schemes made the book plausible, they didn’t go very far to make it at all interesting. The characters are not fleshed out, the plot seems weak, and the story itself seems to struggle to fill an outline of what could have been a promising and engaging novel, but instead just feels forced and downright boring. 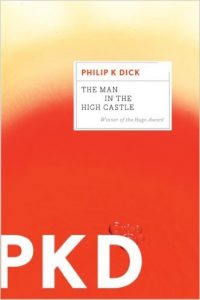 Like Loading...
This entry was posted in Challenges, Fiction, Historical Fiction, Uncategorized and tagged historical fiction, man in the high castle, revisionist tales. Bookmark the permalink.

2 Responses to The Man in the High Castle by Philip K. Dick