Childhood’s End was sent my way by my college-aged son to whom it was recommended by a friend who read it for a poli-sci class. We both struggled a bit to get into it, but he ended up loving it. Me, not so much. I know that Clarke is huge in sci-fi circles (as he is the author of 2001: A Space Odyssey), and this book is considered something of a seminal work in the sci-fi genre, but as that isn’t really my thing, it didn’t resonate as strongly with me as it did with my son. It had its shocking and enjoyable moments for sure, and was certainly good to spark a literary discussion with my kid (which I adored), but ultimately it wasn’t really my cup of tea. 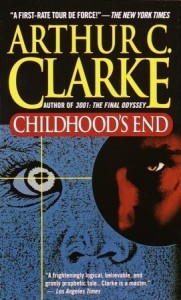 The premise here is that a series of space ships inexplicably appear over the Earth one day, not to stage a hostile takeover, but instead to make the world more equitable and fair. No violence is necessary to accomplish this odd goal, just a series of strange demonstrations of alien power which allow the humans to understand they could not fight back even if they wished to do so. The alien Overlords meet one-on-one with only the Secretary General of the UN, but refuse to show themselves publicly to anyone for at least 50 years after their initial appearance (phase one of their benevolent takeover). Until then, they are content to observe, guide, and speak to mankind largely incognito.

The story of Earth progresses peacefully and relatively uneventfully through phase two, in which human beings wait to meet the everpresent beings from above, all while society is gradually becoming more equitable and placid. Scientific discovery and artistic prowess ebb as humankind is largely content with its fate and it is clear that alien science so far surpasses our own understanding we could never hope to catch up. The fifty years pass and the Overlords eventually reveal their surprising physical forms. The next period involves humans and Overlords learning to live together without undue conflict. We learn more of the alien’s actual limitations, their motivations for coming to our planet, and about the higher power which even the Overlord rulers answer to.

Phase three marks a stark contrast in earthly developments as the Overlords, having met their ultimate goal, are ready to depart the world as they are no longer needed here either to keep peace or drive progress. Just as the Overlords have become superfluous though, so have most ordinary humans as a new race of men has emerged ready to change the world as we know it. Big surprises occur at this point, but telling any more would simply give too much away.

I think the quote that resonated most with me was the following one (and it is likely for this idea alone why this novel was used in a political science course): “Fifty years is ample time in which to change a world and its people almost beyond recognition. All that is required for the task are a sound knowledge of social engineering, a clear sight of the intended goal—and power.” Too true, that, I’d say.

Overall, I’d have to say Childhood’s End was worth reading, especially if you are into sci fi, but this is not one I’d likely reread.

P.S. Why is this cover so darn ugly? I’m using it for my Popsugar book challenge in that category. Ick.

Like Loading...
This entry was posted in Challenges, Creepy/Weird, Sci-Fi and tagged challenges, creepy/weird, Sci-Fi, ugly covers. Bookmark the permalink.