Dinner with the Smileys by Sarah Smiley 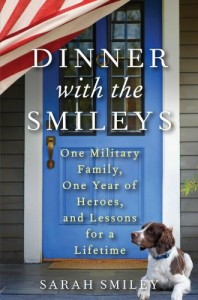 Kelley and I read this one for our neighborhood book club. (Since she read it some time ago, I’m not sure she’ll post about it, so I didn’t label this one “Two Dorks, One Book.”) Dinner with the Smileys: One Military Family, One Year of Heroes, and Lessons for a Lifetime was about a woman whose military husband went on a yearlong deployment overseas and she decided to invite a guest to a family dinner with her sons to keep the loneliness at bay for the 52+ weeks. It had all the elements I should have liked as I felt I could really relate to the author’s issues: I have also been a military wife and had a deployed spouse, I have three sons, I attended college later in life after having a family and job, I have worked as a writer and a teacher, etc.

Parts of the story WERE very relatable and I liked that Sarah Smiley kept the interactions – particularly those about her sons’ attitudes toward the various guests, situations, and meals – realistic. She didn’t sugarcoat the bad manners or reluctance her kids often displayed (or her own occasional lack of interest in hosting!) which helped to humanize their conversations and home life. She stressed that she tried to keep things informal and real even when inviting senators, governors, and the like to her home.

However, I didn’t like that most of the dinners focused on famous or influential people in their Maine community and very few focused on the regular folks most of us might interact with on a daily basis. I don’t necessarily think she set out with that as her goal, but perhaps based on her job or the notoriety the dinners eventually seemed to garner, it did seem that most of the stories that ended up in the book played out as a “Who’s Who” of Maine’s cultural icons. Most of those stories weren’t even showcased with much depth or color either. My favorite of the dinner anecdotes involved the everyday people and I would have liked to have read more of those. The teachers, the neighbors, the friends who helped them when times were hard made for the most interesting stories, and I felt more of those stories would have provided a clearer picture of what life for the four home-based Smileys was really like.

I also felt a little misled when she revealed in a postscript that she’d also had a professional photographer at most of the sessions and used the same stories in her columns for the Bangor newspaper. As a result, I ended up feeling like the author was trying too hard to pull at the heartstrings and ultimately the book registered as just a little too trite.

Overall, not a bad read, but not one I’d likely reread or recommend.

Like Loading...
This entry was posted in book club reads, Nonfiction and tagged book club, Dinner with the Smileys, memoir, nonfiction. Bookmark the permalink.

One Response to Dinner with the Smileys by Sarah Smiley