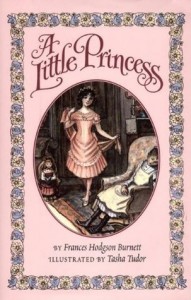 First of all, I feel like I should say straight out that I really, really enjoyed this book. Remember that when you read the whining and complaining that will follow. It’s just what I do, I guess.

This is such a nice, feel good story, with a good-hearted heroine and mean villains and a fairy godmother-type guy. It has it all! Also, starving children, which made me uncomfortable throughout. I’m not going to bother with giving a summary of the book because everyone in the world has seen the movie. I will say that the book is better than the movie, of course, and not just because Shirley Temple’s pouting is annoying.

This story is great, but I can’t help but feel a little let down by the coincidence of the the Indian Gentleman moving in right next door. Just…no. Too much. I also wish that Carrisford had done more for Becky. I mean yeah, he had a “special interest” in Sara (which seems a little weird to type out but is actually not shady), but how can you ignore the little girl who lives in the next room and is still hungry and sleeping on rags with no fire? My 21st century head just can’t wrap its mind around late 1800s class distinctions.

I feel like almost all of this could’ve been avoided if Ram Dass, on that first night, had been like “Yo Carrisford, there’s a LITTLE GIRL of THE RIGHT AGE who SPEAKS MY LANGUAGE and HAS NO MONEY at a BOARDING SCHOOL next door.” Or, even better, “Hey kid, what’s your last name?”

And also, the methods they used to search for Crewe’s daughter. Just randomly searching french boarding schools cause you think she’s probably in France? How about go back to India and talk to his other friends, cough the lady who recommended Miss Minchin’s to him cough. I mean at the VERY least you’d get the kid’s name and age. Or, ask someone who his solicitor was. Bam, done.

Why are people in old books always throwing their aprons over their heads in despair? I don’t understand how that works or what it accomplishes.

And I will leave you with a few things I had to look up:

Audiobook notes:
Narrator: Virginia Leishman.  Really pretty good. The narrator was just fine and I’d recommend this version to anyone. Plus, the audiobook is only like 8 hours, how can you NOT read this?

Like Loading...
This entry was posted in Children's, Fiction and tagged A Little Princess, children's, classics, fiction, Frances Hodgson Burnett. Bookmark the permalink.