Two Dorks, One Book: The Bear by Claire Cameron – A Publisher ARC

Ah, shit. This one’s gonna be all nature-y and survivalish. Totally not my kind of book at all, except FREE****, so there’s that.

I KNOW everyone on the internet (weird, since this is a pre-release but many have already read it) seems to love this book after they’ve finished. And maybe it’s just me being contrary (which is sort of likely to happen, actually), but I don’t think I liked it at all. I’d tell my students that if they have a strong reaction either way, a book has done its job because it made them think, but even I know that is a load of crap, so… forgive me for the all-caps screaminess to come. This one makes me feel a little RANTY. 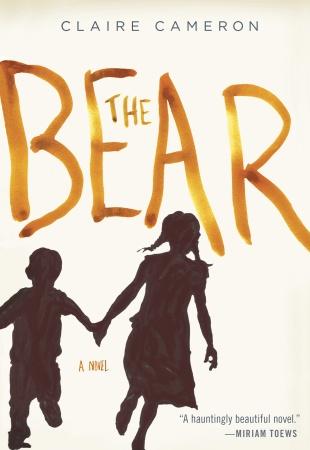 First off, the attack scene is pretty disturbing since we know that the main characters going through this are kids. I decided not to read this at bedtime since I have some kids, like some kids, and don’t generally want to hear stories about horrors happening to kids. It’s definitely a daytime book.

Here are my big issues with The Bear (SPOILERS AHEAD):

The cooler – In the middle of the attack, Dad has the   idiotic idea to put his two kids in a cooler. I cannot get past that. (Even though this is irrelevant, I am also annoyed that the girl has NAMED her cooler and sees it as a friend. Too quirky = feels forced.) Really, though. I am disturbed that Mr. Whyte’s solution is to stuff his two kids in a place where children often suffocate by accident. I mean, this doesn’t seem a like a good plan AT ALL. This seems like his brain was already going in not-nice places if this is his first instinct. Because seriously, how is suffocating your children the answer to a rampaging bear? Has he thought of this before? Did he lure them out there to kill them all? This guy, for all his nature smarts (I assume? I mean, because they camp a lot and have custom-made canoe paddles and such…) seems like a real Froot Loop once he’s in a real Man vs. Wild situation. And say he’d survived the bear, this could too easily be an “oh darn, too late” scenario! Not cool.

Dad’s logic – Sure, bears can swim, but…WHY DIDN’T THEY ALL GET BACK IN THE DAMN CANOE? Or just him with the kids since Mom seems seriously messed up by then? Barring that, why didn’t he float the kids off in the canoe while he attacks 300 pounds of bear with a clearly flimsy canoe paddle? How is the cooler the best option and WTF is the bear doing while he does this????? I mean, really, how did Dad have a chance to go get Anna, get ALEX (because dammit, STICK is not a name, and yes, I’m sorry to steal your line, Kelley), get the damn rock to create an air hole and not get eaten? Was he just ignoring his wife being torn to bits during all this???? Was the bear that preoccupied? And did he just go back after locking the kids in the cooler and volunteer himself up as dinner, saying “ok, bear, I’m done being a crap-ass dad, so you can disembowel me now”? I mean, best case scenario, how did he think those kids were going to get out of a locked metal cooler while he attacked the local wildlife with a meager NOT-WEAPON? I just don’t buy that this as a heat-of-the-moment survival solution, no matter how terrible the circumstances.

Piss-poor parenting – And, speaking of terrible, irrational decisions by the dad (and why I REALLY thought there was more going on here with the dad, for a few chapters anyway)… why the hell is Dad always so mad that he looks like a raging bear who goes off and leaves his family whenever the baby has a shitty diaper or whatever? Why is this five-year-old child so terrified to be bad? Because her dad will leave? Oh hell no, not gonna like this one. And the mom, for all her trying to keep bad food and BAAAAD Barbies from her kids, sure seems to be useless when it comes to a crisis. What sort of adult needs a five-year-old for comfort when she has a breakup? AND WHY THE HELL WAS THAT USELESS PLOT POINT EVEN IN THERE? Except, maybe because it makes Dad look like more of a douche…

The oh-shit-this-could-be-really-awesome moment – Then it occurred to me that maybe the bear was meant as a symbol. I mean, Dad’s constantly a scary bastard, maybe she just THINKS there is a bear and in a weird, Life of Pi, surreal and head-trippy way, Dad is hurting his family. Maybe she blocks it out because the truth is too hard. EXCEPT not. Because I don’t think this book is that fucking clever. The bear is just a bear; the dad is just a dunce (and one who later cuddles and comforts his daughter in a flashback scene, so I guess I was reading him wrong all along), and the story just sucks. I quit.

Cooler problems again – Oh, did I mention? When the kids finally get out the cooler it is because it breaks like eggshells after Anna kicks it. Um, no. Even bear-mauled metal shouldn’t do that. (Ok, maybe it should.) I honestly have no idea what bear-mauled metal would do under that sort of stress, but it feels too damn convenient. After all, the lid of the cooler has just fallen closed; thus, no more air. OF COURSE, it’s AFTER the poopy diaper, but not before they asphyxiate or at a moment when the bear is still around to be a danger.

Mom’s deadness – Why is Mom’s leg pointing up? Is she broken? Eaten? Bleeding out? Giving up? How long has she been there dying and not, I don’t know, searching for her damn kids??? (Because seriously, I don’t care what a bear just ATE off of me, if I had breath left, that’s what I’D be doing!)  The book keeps referring to her leg pointed up so it makes me wonder if it is detached. Ew. And yet when Dad’s leg is ACTUALLY detached, no real mention until later. Maybe that is just what Anna chose to focus on because the rest was gory, but…blargh.

That beginning – In the author’s note, Cameron writes that a bear attack just like this happened in this very park where she once worked (which sounds way too much like the beginning of a horror story at Girl Scout camp). She apparently spent tons of time researching this particular event. Initially, I felt like that is awesome because I can get onboard with some realistic fiction. But then she ends the note with “I added the kids.” WTH? Adding children in this already tragic, gruesome scenario seems horrific. Had she wanted to retell the real event, I’d be in. If she’d had three folks camping and this happened, but leaves one to survive to tell the story, I’d buy it. Had she wanted to retell that real bear attack event reimagined as fiction (even with kids), fine, but then, don’t tell me you’re screwing with me. JUST LET IT BE FICTION. As it is, adding children feels like needlessly toying with the reader’s emotions for dramatic effect and I resent that.

Yadda yadda – After the kids get in the canoe, they float off somewhere safe, drink muddy water, go to the bathroom in copious amounts, and I totally check out. They’re later rescued, grow up, and finally come back to mourn their dead parents. YAWN. After all the forced tension and implausibility at the beginning, I no longer care, but feel SOMETHING more groundbreaking should have happened.

So I hate to be bitchy and all, since this is a pre-release which I got it for free, and this is only the author’s second book, and she looks all pretty and nice when I looked her up on the internet, but sorry, Claire Cameron, this one is a NO for me.

Kelley’s review of The Bear

****This book was provided to our book club by publisher Little, Brown and Company as an advance readers copy in exchange for honest reviews. The Bear is scheduled for release on Feb. 11, 2014.

One Response to Two Dorks, One Book: The Bear by Claire Cameron – A Publisher ARC