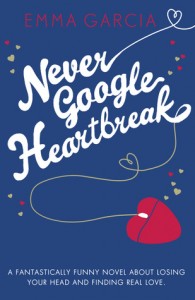 When Viv’s ex-fiancé, Rob, proposed to her three months after she slept with him she thought it was one of those whirlwind romances you read about in magazines. Five years later, after Rob calling off the wedding for the third time, she has finally moved out.

As Viv passes through the three essential stages of grief (denial, vodka, disastrous haircut), she becomes determined that it’s not too late to try and get Rob back. One drunken declaration of love at an extremely inappropriate moment later, and Viv’s scruffy, tequila-swilling best friend Max is there to pick up the pieces.

Just when Viv’s starting to realise that maybe the real thing has been under her nose all along, she makes what might be the biggest mistake of her life…

Can love sneak up on us unexpected? What’s the answer to heartbreak? And what’s a girl to do when even the Internet doesn’t have the answer?

You know what, this was not a bad book. That, unfortunately, doesn’t mean that it was a good book. It’s squarely in the middle of the scale for me. My main issue is that is just wasn’t funny enough. I need my british chick-lit heroines to be wacky and spilling things and socially dorky and tripping over stuff and accidentally knocking over cakes at weddings. Vivienne ALMOST hit that note, but not quite.

Aside from that, my problem with this book was all the extra stuff that was included that didn’t really advance the storyline (basically everything that didn’t involve Max or Rob): her job problems, the entire website thing, Christie not ending up being an evil mastermind out to steal Viv’s job, the like, 9 engagements that happened near the end of the book that were never mentioned again, and even the grandmother. I feel like these parts were there as character/world building for Vivienne, but by the end none of them really fit together at all and didn’t really give any more insight into her character, it all just felt like random stuff thrown in.

And some things I enjoyed: I loved the Rob storyline, it was very satisfying to hate him and the wait for Vivienne to wise up about him was (deliciously) painful. Max was a great love interest, although he wasn’t featured nearly enough. Michael was a nice, wacky side character as well.

I must say that I hate, hate, HATE how the book ended. We didn’t get a joyous reunion scene, or get a real explanation for the silence, and who the hell just up and moves to Spain? I would actually really like to read the second book, though, which is apparently called OMG! Baby. Now that all the other stuff is done with, I’d really like to see what happens with Max.

Never Google Heartbreak will be released on March 7, 2014 by Bookouture. This book was received from the publisher in exchange for an honest review.

**Note: I believe that the above pub date is only for the ebook. This book was originally released in paperback in 2012.