The Eyes of the Dragon – Stephen King 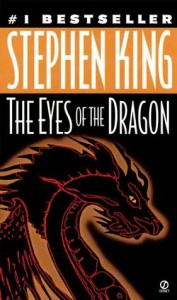 A kingdom is in turmoil as the old king dies and his successor must do battle for the throne. Pitted against an evil wizard and a would-be rival, Prince Peter makes a daring escape and rallies the forces of Good to fight for what is rightfully his. This is a masterpiece of classic dragons-and-magic fantasy that only Stephen King could have written!

Does that description sound like something you’d be into? Yes? Then you can be my friend. If no, then just, like…read it anyway. It’s SO GOOD. Of course I am extremely biased about this book, because I freaking LOVE IT.

I think that one of the things I like so much about it is that it’s written extremely simply, almost like a fairy tale for kids. It’s like the narrator is talking to you, and that makes it so easy to get wrapped up in. But also, the story is wonderful, too. It’s somewhat fantasy-ish, but not overly. Like, there’s a magician. And a monarchy. The dragon isn’t really actually in it. And that’s it, there’s not really much magic or anything. So don’t let that deter you fantasy-haters (do they even still exist?)!

And here’s something new to love about it, that I discovered during my latest re-read – or rather, my latest listen, because I did an audiobook of it this time. Bronson Pinchot is incredible. Like, hands-down, the best narrator I’ve ever listened to. Near the end when Flagg is climbing the steps and yelling, I had chills. I can only assume that this is the Perfect Strangers Bronson Pinchot, right? He’s narrated a bunch of different genres of audiobooks, many of which I’ve just added to my Audible Wishlist. Anyway, he knocks this great book right up into the stratosphere.

Like Loading...
This entry was posted in Fantasy, Fiction and tagged Eyes of the Dragon, fantasy, Favorites, monarchs, Stephen King. Bookmark the permalink.

2 Responses to The Eyes of the Dragon – Stephen King