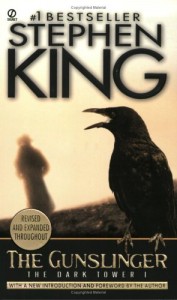 Soooooo…you know how The Dark Tower series is supposed to be like this huge awesome epic fantasy-type story that everyone in the world loves? There are countless websites devoted to it, in fact the people at the WoT/ASoIaF forum I moderate love the shit out of this series. The series is OVER, and the fansites are still getting updated. It’s supposed to be like a career-defining series for Stephen King, I’ve been hearing about it and meaning to read it all my life.

WHERE IS THAT SERIES? That is what I wanted to read. I did NOT want to read this rambling, vague, terrible piece of boringness. I knew I didn’t like it from the first 20 minutes of the audiobook, but I kept waiting for it to get good. And I waited…and waited…and waited. IT NEVER HAPPENED. Do you know, I still don’t know what exactly a gunslinger is. I mean, I get the general idea, but if it has a name I feel like it should have a definition…and that definition should be in the book that shares a name with it, damnit!

I think maybe I went into it riding my Eyes of the Dragon high from last week, expecting it to be similar to that since I know that Flagg is involved in both stories. And it just…wasn’t. So, my fault there for expecting something it wasn’t. Also, I don’t think I should’ve done an audiobook of this one. It’s not rocket science or anything, but it’s very…subtle. I think I needed to concentrate a bit more than I do with my standard “car commute” audiobook.

But…seriously, does it get better? I just can’t believe I hated the book this much when it seems like it’d be something right up my alley. I’m really trying to think of a book I disliked more than this one, and I’m not coming up with anything. I’m still undecided on whether to continue the series, because I FEEL LIKE IT SHOULD BE BETTER THAN THIS.

2 Responses to The Gunslinger – Stephen King