Centuries of June by Keith Donohue

WEIRD. Centuries of June is just plain weird, but compellingly so. At times, it is laugh-out-loud funny and at others, it is simply surreal and hallucinatory. And I loved it. 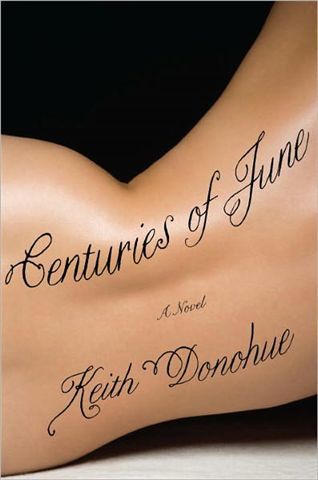 The novel begins with our narrator landing on his bathroom floor bleeding profusely from a head wound which he acknowledges will make his floor “murder to clean.” Ha! As he attempts to recount how he ended up there, he is joined by a doppleganger of his father who sneezes feathers and subsists solely on whiskey. During his brief forays out of the bathroom, he stops to have conversations with his cat (who sometimes talks back) and peek in on the eight naked women tangled in his bed a la Gustav Klimt’s The Virgin. The narrator, let’s call him Jack, has no recollection of how he ended up brained on the bathroom tile, why he’s hosting a bevy of sleeping beauties in his bed, or just why all the clocks in his house have somehow stopped.

Each of those naked lovelies awakens and heads off with her weapon of choice to attack Jack in the tiny lavatory. Dad, or let’s call him Samuel Beckett, prevents these murderous rampages by allowing each to tell her story of degradation at Jack’s hands.Their ire dissipates as one by one, each of the girls — a former slave, a cave-dwelling native, a cross-dressing ship’s mate, a proclaimed witch, a gold-seeking prospector, and the like — explains why she feels Jack is the cause of her ruin. Jack, with no recollection of being involved with any of these women, begins to feel some guilt for perhaps mistreating them in his past incarnations.

Centuries of June is full of subtle and not-so-subtle allusions to Waiting for Godot, Tristram Shandy, the Marx Brothers, and the Salem Witch Trials. If my library digital loan of this weren’t up tomorrow, I’d definitely begin an immediate reread because I liked it so much and rushed through it to get to the end. I did find the ending a tad anticlimactic as I’d already figured out some of the novel’s twists, but I didn’t feel that detracted from its beauty as a whole.

You know, the last book I read in the magical realism genre, The Silence of Bonaventure Arrow, was the last decent book I’ve read. Paired with this, I think I now have a new favorite type of literature. I was looking for something different to read and this was definitely IT.

Like Loading...
This entry was posted in Contemporary, Creepy/Weird, Excuse me, Fantasy, Fiction and tagged Centuries of June, Keith Donohue, magical realism. Bookmark the permalink.