After the last middling sequel in the “Parasol Protectorate” series, I had fears this might be my last Alexia Tarabotti novel. After all, they’re not offering these newer editions in ebook form free from the library, and I certainly was not going to be buying more than one of these things if they continued to stink. Fortunately, Blameless surpassed my expectations and it seems that Carriger is back on her game and quite “the thing.” 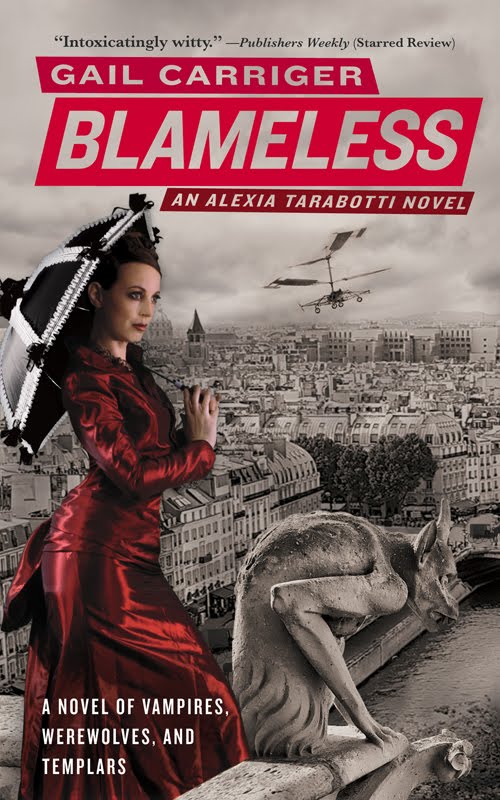 This novel of “vampires, werewolves, and Templars” is unquestionably better than its predecessor; I have also apparently gotten used to the anachronistic steampunky elements now, perhaps because there were less of the werewolf/vampire bits around to overload my teetering belief system. I also just ADORE the segments when Queen Victoria puts in an appearance…she seems so no-nonsense and starchy, exactly as I picture her in real life.

The rampant witticisms and subtle puns from Soulless that I missed so much in the last novel are back en force in Blameless. I’m seriously saving up the line below spoken by Alexia’s pragmatic stepfather to use in actual conversation one day soon, but the rest just made me laugh.

‘I have died and gone to the land of bad novels,’ was Squire Loontwill’s response. ‘I am ill-equipped to cope with such an occurrence.’

Vampires were scarce, and generally rather old. Murdering one even in self-defense was like thoughtlessly destroying a rare aged cheese. True, a fanged and murderous rare aged cheese, but…

Lord Maccon was built like a brick outhouse, with opinions twice as unmoving and often equally full of crap.

AND, I know that’s lots of quotes, but here is my favorite, when Alexia’s unfortunate situation leads to the end of her sister’s brief engagement:

‘Where will I find another pair of eyebrows like that? Devastated, I tell you, Alexia. I am utterly devastated. And it is all your fault.’

Evylin, it must be noted, did not look nearly so bothered as one rightly ought over the loss of a fiance, especially one reputed to possess such heights of eyebrow pre-eminence.

Also, doesn’t Alexia look lovely (and suspiciously unpregnant) in her claret-colored gown on the cover (I just love when the cover art makes an appearance in the novel). Note her trusty parasol is back (although I doubt that is the weaponized one she carries so often). I’m also pretty sure that is the ornithopter in the background and surprisingly, I really liked that addition 🙂

Oh, and the characters FINALLY got around to mentioning the titular “Parasol Protectorate” I had nearly given up on, so…yay. Overall, I thoroughly enjoyed Blameless and am off to begin Heartless…I’m entirely sure I won’t get any sleep tonight, so here’s hoping for a snow day 😉