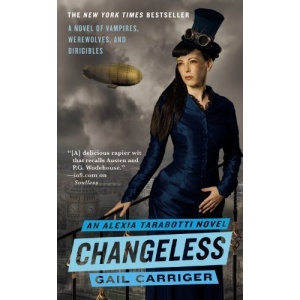 There was way more steampunkish stuff in book two, this “novel of vampires, werewolves, and dirigibles.” By this, I mean lots of technological things that certainly were NOT in existence in the 1870s, and with their greater presence here, the novel (with all its werewolves and vampires) somehow comes across as less realistic. I know, I know…but apparently my suspension of disbelief can only stretch SO FAR for one book.

I also am a little irritated that some of the funny lines from book one (particularly the initial one about the glassicals) get repeated here almost word by word. Bleh…laziness on the part of the editor or writer.

Also, there was far more gallivanting around Scotland by the main characters and it just seemed less charming. I mean, one of the things I really liked in Soulless was the wooing and courtship between Conall and Alexia. They kept striving to keep prim and proper according to Victorian-era societal norms all while also being hunted down for their decidedly abnormal supernatural and preternatural states. It seemed quaint and human and I liked it.

Changeless was all mystery regarding Conall’s abandonment of his original Scottish pack (not exciting), the unlikely “humanization” of all the supernatural set (boring), concerns over Alexia’s new friend/guardian Madame Lefoux who wears men’s clothing and invents things (seems anachronistic and wrong), and a romance between Alexia’s friend Ivy-of-the-ugly-hats and an entirely inappropriate man (who cares). None of this interests me a bit and I have to say the whole werewolf bit, as expected, is wearing on me.

Finally, and perhaps most annoying of all: I’m disturbed by the fact that this book cover, while making the heroine seem extremely pretty, also makes it look like Alexia is trying to rub her own crotch through her many taffeta and petticoated layers. Also, where the hell is the requisite parasol?