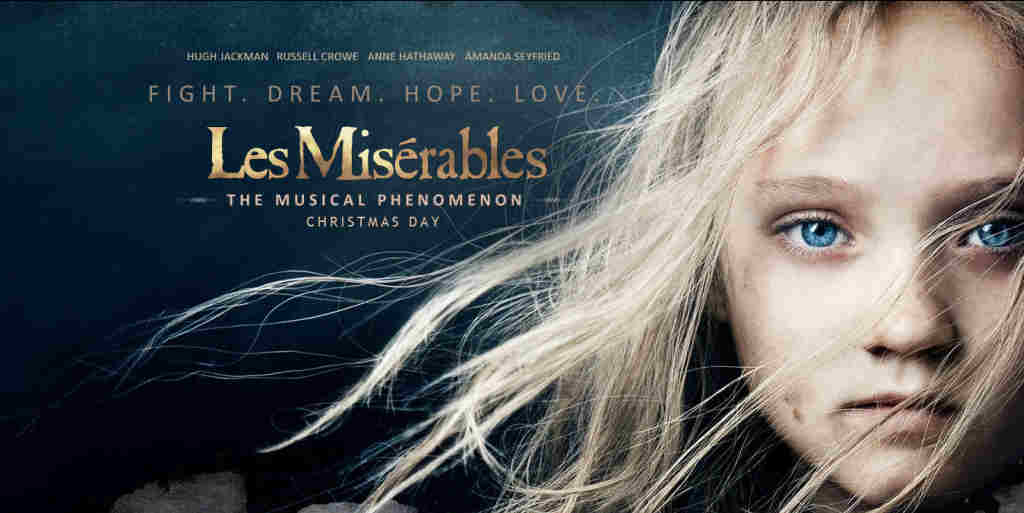 Ok, so I feel like I should apologize for the fact that my last three posts were movie, rather than book, reviews. After all, this a blog called theBOOKdorks. Eh, at least they were all movies BASED on books…so, anyway… I was SOOO looking forward to this movie. I adore the Les Mis musical and can’t wait for March to arrive so I can see it again when the traveling Broadway production comes to Richmond (thank you, Santa!). I have been watching the countdown via the film’s Facebook page for months and all the trailers and reviews that were coming out seemed amazing…

Well, I finally got to see it last night and I have to say I loved almost all of it. Anne Hathaway deserves all the accolades she is getting for her role (and singing) as Fantine. Her “I Dreamed a Dream” is breathtaking. Hugh Jackman doesn’t have the powerhouse vocals we’d normally get in a stage version of Jean Valjean, but he is a strong enough actor to carry off the part convincingly. Amanda Seyfried’s reedy voice seemed too weak to carry a memorable role like Cosette, but somehow, that thin quality works in illustrating her character’s innocence. Samantha Barks reprises her role as Eponine and performs commendably. My favorite, though, was surprising; I adored Eddie Redmayne as Marius. I normally find his stage character to be somewhat flat…he simply loves Cosette at first sight, is oblivious to Eponine, and is a budding revolutionary and I barely care. However, Redmayne’s “Empty Chairs at Empty Tables” is heartbreakingly simple and emotive. It even made this noted noncrier weep. I immediately came home and downloaded his version of the song (although I do have the complete London Dream Cast soundtrack already) from ITunes. Already it has replaced the stage version in my playlist. It is THAT good.

My only complaints: Damn Aaron Tveit looks too much like Aaron Taylor-Johnson/Jasper in Anna Karenina and ended up distracting this viewer in the normally powerful and bombastic role of Enjolras. (What is UP with that greasy, pasty, overly dyed look lately???) Shortening the Marius and Eponine “A Little Fall of Rain” took away some of its gravitas and left me wanting more; it is arguably my favorite song in a musical full of showstoppers. Helena Bonham Carter and Sacha Baron Cohen were annoying even as comic relief and seemed too hokey and modern for the Thenadiers (seriously, why did she have to look like Yoko Ono at the wedding and why was “Beggars at the Feast” cut?). Still, these are all fairly minor complaints and I could live with them.

But then, dammit. Then, there was Javert. Russell Crowe? Really? He was the best we could do as the persistent inspector who spends his life trying to bring down Valjean? While he wasn’t BAD exactly, he wasn’t commanding enough or strong enough vocally to handle the role. I think Mark Wahlberg would have been a better choice by far; he can carry off dramatic parts for sure and that boy at least can sing.

Like Loading...
This entry was posted in Uncategorized and tagged Les Mis, movies based on books, old favorites. Bookmark the permalink.