There is just something about this story that draws me in. I’ve never quite been able to say what it is, though. But whatever it is, it was compelling enough that I ditched work to go see this movie with my dorky sister. 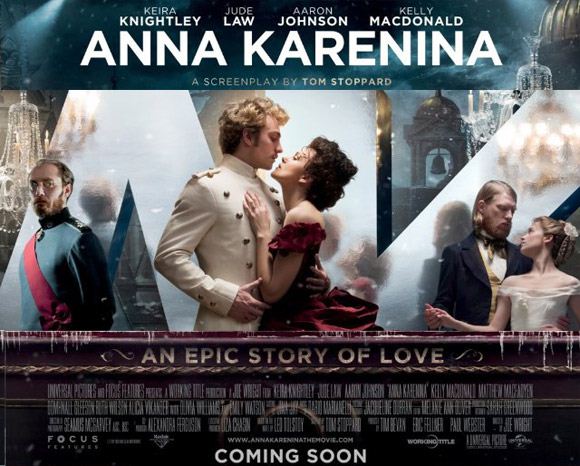 Michelle says: This version is full of artsy elements which show the entire film (which spans years and many locales) on one stage, cleverly using the wings, rafters, and other set pieces to help create scenes. While I worried the artifice of this would become distracting, I eventually enjoyed the unique twists created by the film-via-stage aspects. I think it is primarily because of these theatrical elements that I liked this film at all.

Three intense scenes in particular were done very, very well all by using the film-within-a-play device. The first is definitely the initial dance between Vronsky and Anna. While the two are performing some odd waltz which involves a crazy goosenecking of their hands, the other dancers freeze to throw the couple into direct spotlight. As they whirl around wordlessly, the dance grows ever more passionate and the two bring the other dancers to life as they spin nearby. Kitty, oblivious to her young partner, watches them dance feverishly and begins to fall out of step, becoming increasingly jealous and disoriented by their actions. It is a spot-on scene which shows both Kitty’s bewildered disappointment and Anna and Vronsky’s building attraction.

Next is the race in which Anna screams out “Alexei” in front of all of St. Petersburg society when Vronsky falls from his horse. The drama in the scene builds artfully as Anna whips her fan in the silent theater and the resulting sound mimics the hoofbeats of the approaching racehorses. The frozen characters and escalating sounds as the dramatic racing scene approaches illustrate the tension of the scene perfectly. I guess I had forgotten that Anna’s husband and her lover shared the same first name, but Karenin’s rushing to her side to mask the impropriety of her outburst clearly shows his respectable love for her in spite of Anna’s making him look like a cuckolded fool in public. Beautifully done.

My third favorite scene was the reunion between Kitty and Levin. In spite of her earlier rebuff, Levin has returned to woo Kitty again, this time in a parlor scene where the two, unable to be alone, share a private conversation while playing a guessing game with alphabet blocks. It is quaint and tender and full of forgiveness and tentative romance. I LOVED it.

I have decided that I just do not like Keira Knightley. It’s kind of shocking since I’ve seen her as Elizabeth Bennet and that repulsive girl in Atonement and even in the Pirates of the Caribbean films and she didn’t bug me nearly as much. Of course, she always did have the Julia Stiles-ish flat face, which is annoying, but somehow her accent here (too British), her gooey mouth (there were actually strings of saliva trailing from her fangs in the scene where she tells Vronsky she is pregnant…ew, couldn’t they afford to do just one more take???), and her birds’ nest hairdos (WTH?) make it hard to root for this Anna. All Annas I would assume are selfish, carnal, and somewhat black of heart, but it is hard to see how this one has any redeeming features at all.

In the previews, I was also concerned about Jude Law being serious enough an actor to carry off Karenin’s resigned dignity. He surprised me here. His portrayal did not have the emotional depth I wished for because Anna and Vronsky, Levin and Kitty, and even Stiva and Dolly all seem to get more screen time; still, Law plays his part with a quiet restraint appropriate for the role. I guess I have to grudgingly admit that the Karenin casting works.

Then, there is Aaron Taylor-Johnson as Count Vronsky! He channels Jackson Rathbone’s creepy pale, poorly dyed Jasper in the Twilight movies. Combine THAT fabulous look with the old mustache-twirling villain of silent, tie-the-girl-to-the-train-tracks films and you have the totally unbelievable Taylor-Johnson Vronsky… It is ICK! There is just no explanation for how distractingly wrong he is for this part. This leaves us with absolutely no compelling male lead in a love triangle film except…except…dammit, except pleasantly gingerhaired Konstantin Levin! Now, I know that Levin is the character whose simple life and selfless love we are to respect and emulate, but that lesson seems largely written out of this AK rendition. I find it NOT OKAY that Levin is the most attractive male throughout the whole dang film! I know, I know, we’re supposed to GROW to love Levin (and maybe respect Karenin) but first we must be taken in by Vronsky and his passionate nature! Nope, not possible here because Vronsky looks like a dandified, foppish pedophile.

In comparing this film to the only other Anna Karenina I’ve seen filmed (the one with Sean Bean and Sophie Marceau some years back), I guess I liked this one better probably because of all the nifty theater tricks. After discussing it here, I almost feel I need to see that film, this film, and read the book again to make a true comparison. One thing it sure though, it won’t change my main complaint: the atrocious, unforgivable miscasting of Vronsky!

Well, I’ve got nothing to add after reading Michelle’s perfect description of the movie up there. I enjoyed the same things and hated the same things that she did. It was a pretty movie, but not really as pretty as I expected – the dresses were sort of dull and unfancy, and Kiera Knightly came off as boozey and disheveled and her hair seemed to have been hiding at least a few birds.

Some thoughts I remember having during the movie:

“So who’s the gross boring guy Anna’s married to? Why is she married to him? WHAT? THAT CANNOT BE JUDE LAW, JUDE LAW IS HOT AND THIS GUY IS OBVIOUSLY A GRANDFATHER.”

“My butt has fallen asleep.”

“Is that Jasper? Who decided he’d make a good romantic hero? And does he know he’s not in Twilight right now? Or did someone just hide his bronzer?”

“Who are all these people and how do they know each other and why are they all called ‘princess?'” [I really wish more of the relationships had been explained in the movie, like how Kitty is Dolly’s sister, to give a reason for Kitty to always be hanging out at Stiva’s house.]

“It’s been two hours, why is this movie not over yet?”

“The book was long, but a lot of the should’ve-been-edited-out parts** seemed to focus on cultural and political events and rambling backstories, and ALL of that was left out of the movie. SO WHY IS THIS MOVIE 2.5 HOURS LONG? [There is no reason for a movie to be that long. Ever.]

“Shit. Now I’m going to have to reread this book.”

**I know, who am I to judge Tolstoy. But…dude was wordy.

Like Loading...
This entry was posted in 2 Dorks 1 Book, Classics, Film Based on Books, Historical Fiction and tagged Anna Karenina, movie adaptation, Two Dorks One Book. Bookmark the permalink.