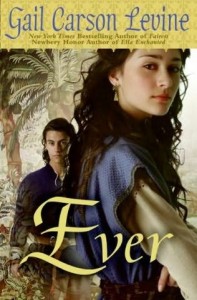 First of all, I have to say…this is NOT a fairy tale retelling. For the first 45 minutes of this audiobook, I thought this was a retelling of Snow White (I think I had it confused with Fairest) and I kept wondering if my discs were mislabeled by the library or something, because surely an adaptation of Snow White wouldn’t be set in an India-like place. But, my denseness aside, I do sort of think of Gail Carson Levine as just a fairy-tale adapter, and the name sounds like a fairy tale, but…nope.

So! Ever is a very short book set in a magical world where people wear tunics and worship many gods. Also, the supporting characters were read in an Indian-like accent, so that’s what I kept associating it with. The characters are Kezi, a young girl, and Olus, God of Wind. Kezi lives with her beloved parents and they worship a god whose name I can’t spell because I read this book in audiobook form, but who is very, very important to the story. Olus is lonely, so he somewhat creepily spies on mortals, looking for a friend. Obviously, he eventually falls in love with Kezi. Well, not eventually – instantly. They’d seen each other two times before she started calling him “my love,” and that’s not cool. Aaaaanyway, not too far into the book Kezi’s father vows to sacrifice her to their god in thanks for curing his wife of an illness.

The rest of the book deals with Kezi and Olus trying to find a way to avoid her being sacrificed. This is a super short book, so the small annoyances I experienced aren’t too big of a deal. The biggest annoyance, I think, is the end.

I actually really liked the religious themes of the book. See, the people of…whatever country Kezi lives in…worship Admat, an all-powerful, never-seen god. But in the neighboring country, Olus and his family are the gods, and have never heard of this “Admat.” So Kezi and Olus start to wonder if Admat even exists.

I do have one complaint. Kezi is portrayed as a very good, very pious young girl. When she basically volunteers to be sacrificed, she plans to go willingly…but then spends the rest of the book trying to figure out a way to get out of it. When she finds out about Olus and gets a chance to become a goddess herself, it doesn’t take her long at ALL to 1) believe that Olus and his family are gods when she’s only supposed to believe in Admat, 2) throw her beliefs about Admat out the window in order to become a goddess herself and avoid the sacrifice, and 3) agree to become a goddess to avoid sacrifice when she said from the beginning that she has no interest in becoming a goddess, or living forever.

Now, the things I described above are kind of an interesting part of the book, sort of the evolution of Kezi from fairly…unworldly and blindly religious, to more enlightened. But at the same time, I thought it was somewhat unrealistic of her to make the above decisions. But hey, we’re talking about gods and goddesses here, so whatever.

Oh wait, I actually have another complaint. I did NOT like the ending. I didn’t like the fact that Kezi left her family forever and never saw them again. It wasn’t even really sad, just unsatisfying.

2 Responses to Ever – Gail Carson Levine