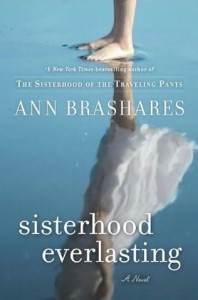 From #1 New York Times bestselling author Ann Brashares comes the welcome return of the characters whose friendship became a touchstone for a generation. Now Tibby, Lena, Carmen, and Bridget have grown up, starting their lives on their own. And though the jeans they shared are long gone, the sisterhood is everlasting.

Wow, so a 10 year reunion book for the Sisterhood? I am SO all over that. I loved the first four in the series. I’m going to put my thoughts after a cut, because I can’t NOT talk spoilers on this one.

We have lost our Sisterhood. These are not the girls we once knew. Instead they’ve been replaced by:

Yes, Tibby dies. She dies without ever being seen in this entire book, actually. No POVs, it happens offscreen. I feel cheated. And then…

Tibby has left them all these really annoying letters, to be opened on certain specified dates. Well, except Carmen. Carmen weirdly doesn’t get any words of love or wisdom in her letters, she gets the Hand-Me-Down Magical iPhone of Life-Changingness. All-Knowing Tibby guides them all to make choices that fix their lives by the end of the book, and then she gives them each a house on Brian’s new property in Pennsylvania, so they can all live together and be near Tibby’s two year old daughter that none of the girls knew about. But…what, they’re all just going to live in Brian’s barn forever? Also, Kostas and Lena – again? Not again. I can’t take another book of slimy Kostas being Lena’s pined-after soulmate. I don’t like Lena and Kostos together, and I hate that Lena lost so much of her life waiting for him. Kids, it’s been twelve years, it’s maybe time to move on.

The reasons for Tibby breaking contact for two years seemed like drama for the sake of drama to me. She would never do that, and the girls would never let her. She wouldn’t have a daughter without telling them. She wouldn’t move to another continent without telling them. These girls are all in such awful places in their lives, and THAT is enough drama to be going on with. I feel like it would’ve been more enjoyable for me if Tibby had died offscreen after the ending of the book. I don’t understand it, the other books in the Sisterhood series never needed letters from the grave and secret babies to make me love them.

Oh, one thing: I *love* that Marly’s suicide was more or less confirmed in this book. It’s something I’ve been certain of for four books but damnit, it was always just vague enough to make me wonder if I was reading too much into it.

Sisterhood Everlasting was a depressing read. I am struck by how SAD these girls are. None of them have gone anywhere with their lives. I HATE that none of them have continued with their talents (soccer, painting, Dawson’s Creek-like godly movie-making abilities). I felt like the fourth book in this series had wrapped everything up pretty nicely. The girls had found their places and their personalities and moved forward. I was happy with that ending! Then to see them all ten years later, having all moved backward or stayed still…ugh. I feel like they all had so much potential and now…they’re all just so pitiful. Pages and pages of descriptions of sadness, and none of the happy supportive friend stuff that I liked from the first books. After Tibby dies, I would’ve liked to have seen some character growth, some decision by the girls to make things better for themselves. But nope, they just wallow for the rest of the book and wait for All-Knowing Tibby to fix everything from the afterlife.

Best line of the book: “This island was a fucking sinkhole.”