Laurie Notaro – The Humor Essays (Not the Fiction, which Frankly, Sucks) 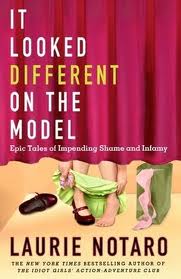 It Looked Different on the Model: Epic Tales of Impending Shame and Infamy (2011)

It is hard to do these awesomely funny books justice without giving away the premise of the jokes. Notaro is hilarious and self-deprecating in a way that I, as an idiot girl, dork, and former fat bride, can totally relate to. In every book, she makes me laugh out loud with her irreverent wit. In It Looked Different, her newest collection of essays, Laurie (along with her alter-egos Laurie circa 1994 and Ambien Laurie) sleep-walks, snarfs down snack cakes, gets kicked out of neighborhood parties and post offices, traumatizes her young nephew by making him touch giant blue bull balls, gets stuck in too small clothing (on sale!), and revels in all her usual awkward, non-licked glory. Love it!

The Idiot Girl and the Flaming Tantrum of Death: Reflections on Revenge, Germophobia, and Laser Hair Removal (2008) 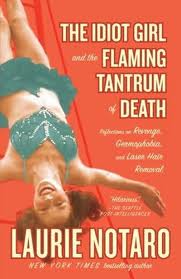 I really enjoyed this one. This collection is quite funny, particularly the “Death of a Catchphrase” regarding the seedy underbelly of slang language, Laurie’s turn on throwing birthday parties for spouses and pets, and how-tos on disgusting your doctor and your mother, infuriating and/or repulsing repairmen who make service calls to your house, documenting terry-cloth genitals for posterity, and avoiding unexpected fowl-bowel eruptions from the sky. This is one of Notaro’s best and chronicles her move from Phoenix, AZ to Eugene, OR and her reflections on getting old enough to drive a Prius, get out of touch with college students, and misunderstand the music and bandanna-shirts of today’s youth. 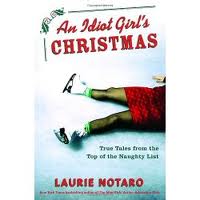 An Idiot Girl’s Christmas: True Tales from the Top of the Naughty List (2005)

I’m not usually a fan of holiday-themed books, but since I love Laurie Notaro, I had to give this one a try.

Unfortunately, 3 of the 13 vignettes were previously published in prior books, which feels unfair the unsuspecting book buyer. (Come on, Laurie, you said yourself you hate regifted, slightly used presents…so don’t your idiot girl fans deserve originals?) Beyond that, and the fact that this tome consequently feels much shorter than the rest, I did enjoy Notaro’s rants on Christmas topics.

I loved the snarky “What I Really Want For Christmas” and the general vindictive fun that is “O Holy Night, or the Year I Ruined Christmas.” Overall, we learn that Notaro really knows how to host and crash a holiday party.

We Thought You’d Be Prettier: True Tales of the Dorkiest Girl Alive (2005) 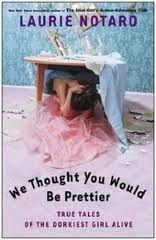 This one begins with Laurie on her book tour for her first book, Idiot Girls. It’s a bit of a let down as the last one was SOOOO good, but I have to admit, I liked this one too. Her dreams of kicking the Flippy Hair’s Guy’s ass, or his hair’s ass, her violent reaction to email hacking, her brutally funny honesty about hitting an illegal immigrant with her car, and her rant about a discount store patron who is trying to buy expired vaginal cream and fake nails cracked me up again. 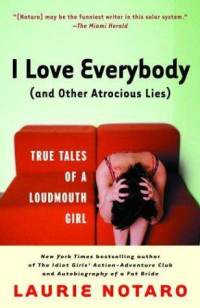 I Love Everybody (and Other Atrocious Lies): True Tales of a Loudmouth Girl- (2004)

Hands down, this is my favorite Notaro memoir.  I crack up just remembering the truck with a nutsack even years later. I also snort-laugh at her hypochondriac tendencies including her fear of Cancer of the Upper Asshole, revelations on the choice each student must make in journalism school about whether to join the Barbies of broadcast or the hominids of print, how to blow booger bubbles for bosses, and crafting plans to humiliate your mother by naming your first child Sphincta. She really seems to have hit her stride in this third book when she describes being kept alive by junk food preservatives, becoming a drug runner from Mexico, fighting with her husband over their Sims doppelgangers, and the indignities of being replaced by a freakish costumed canine at work. The funniest by far is when Laurie admits she is truly a mean girl who doesn’t love anybody or anything, especially Disneyland or the oxygen-dependent lady blocking the sample trays in Costco.

Autobiography of a Fat Bride: True Tales of a Pretend Adulthood (2003) 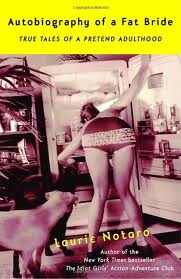 Lots of funny bits here including how Laurie’s husband proposed, why she wears monkey-fur underpants, what to do if you smell like onion bagels at a Playboy photo shoot, how to deal with pscyho dogs, Kitty Mummies, and red mice, and what one must do to avoid looking like a white-satin sausage at her own wedding. I found it most reassuring that other grown-ups, like Laurie and her hilarious friends, are really just pretending like me. 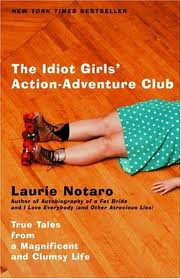 The Idiot Girls’ Action-Adventure Club: True Tales from a Magnificent and Clumsy Life (2002)

This is probably my least favorite of all the memoirs, and I’m pretty sure that if I’d read this one first, I probably wouldn’t have continued reading Notaro’s work. It mostly chronicles her days as a somewhat pathetic barfly. Again, there are some funny moments to be found here, but as I didn’t really have an extended period like this in my own life, I can’t relate to much of what she’s saying. Still, her escapades as a hobo serving jury duty, rants on proper bathroom stall protocol, and tempting the cosmos over an orphaned dead woman’s ashes are all worth a laugh or two.

Like Loading...
This entry was posted in Nonfiction and tagged humor, Laurie Notaro, memoir. Bookmark the permalink.

2 Responses to Laurie Notaro – The Humor Essays (Not the Fiction, which Frankly, Sucks)