Can one tragic historical event determine the future of an entire country? The world? The universe? More? Can saving the charismatic young president of Camelot really improve life in OUR time? Could the ripples that the Kennedy assassination caused have brought about Vietnam or 9/11? Could that imbalance even cause natural disasters like earthquakes and tsunamis? In Stephen King’s able hands, the answer is yes; but changing such events not only doesn’t bring the expected outcomes, but has serious consequences in other times and places. The past, he tells us, is both fragile and “obdurate.” 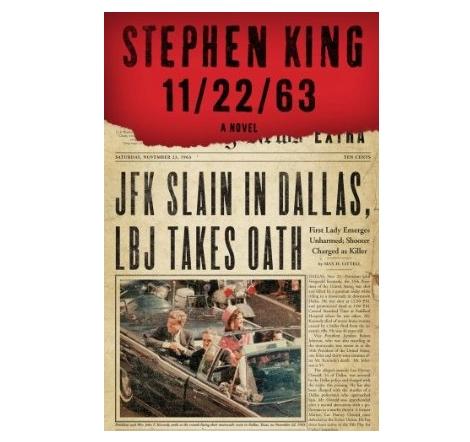 While overly long and dragging at times, Stephen King’s 11/22/63 was, on the whole, a good read. It is insightful, asking big questions: what are the consequences of our actions on the world around us? Is there a true “butterfly effect” that allows minute changes in one life or time to totally rewrite other futures? Do we really control our own lives or are we just parallel “strings” leading back to others like ourselves? Other implicit questions the novel presents: Does the past truly “harmonize” itself? Do hearts draw other hearts even across time and space? Does one person who knows the future have the right or the responsibility to change it for the rest of us?

At times a romance, a sentimental history, and a plodding (Jake/George spends FAR too much time determining if Lee Harvey Oswald actually is the solo gunman) time-travel thriller, this is one to pick up if you are a fan of historical fiction, Stephen King’s less scary works, or the Kennedys. I’d been bored with Stephen King for quite a while as his work was starting to feel repetitive, but I enjoyed this and the last one I read, Under the Dome. I think the King of the bestseller is back…his bestsellers are just different than the gruesome fare they once were; for me, no longer a teenager seeking that shock value in books, this is a very good thing.

Like Loading...
This entry was posted in Fantasy, Fiction, Historical Fiction and tagged Stephen King. Bookmark the permalink.