Life after Life by Kate Atkinson 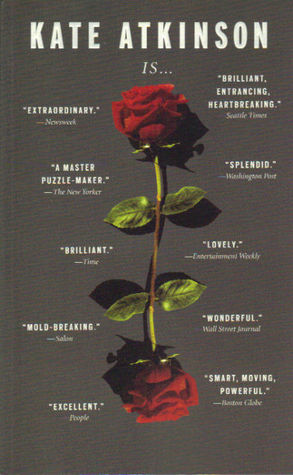 So, I entered a contest for my book club a few months back which would have provided snacks and prizes for my chosen novel, The Snow Child. While I didn’t win us the goodies, we did get ten advance copies of Life After Life to read and review as part of an online marketing promotion by the publisher*; the novel’s U.S. release date is April 2.

Kate Atkinson’s Life After Life is a tricky book to talk about since the narrative is so distinctly nonlinear. I guess let’s first start with the obvious: it’s MAMMOTH. The uncorrected advanced proofs we received were 500+ pages (with the slightly altered ARC cover shown here). Still, and although I ultimately liked the book very much, I did think it dragged a little in a few parts and wish it had been maybe 100 pages shorter; such a cut would have made the remaining vignettes crisper and more profound.

The title is clever and makes it seem that Ursula’s life cycle is endlessly on repeat. After all, she lives life after life after life…In fact, the blurb teaser is: What if you could live again and again, until you got it right? That doozy of a question, however, proves quite difficult to answer.

Readers know something is up right away because it seems Ursula is continually being born. In each birth, Ursula arrives during a blizzard in 1910 in rural England. In one incarnation, she is dead before taking her first breath. In another, the doctor who arrives just before the event is able to cut the cord strangling her tiny neck. In yet a third, her mother and a maid accomplish the deed.

The sense of deja vu continues throughout the novel for both Ursula and the reader as she relives several traumatic early experiences: the bloody death of two pet rabbits to backyard foxes, a near-drowning while on a seaside vacation, being left in the yard as an infant. Her countryside upbringing does not change much in any of her lives, although what she takes away from these incidents in each iteration does.

The parts that do change, however, alter both Ursula’s life and those of all the people around her. Sometimes a neighbor girl is slaughtered, sometimes Ursula is raped by a visiting American, sometimes she marries a wife-beating control freak or a high-ranking German official, sometimes she remains unmarried but has trysts with a series of inappropriate men, sometimes she has a child and sometimes she is childless, sometimes she grows up to befriend Eva Braun, kill Adolf Hitler, or rescue those who are bombed out of their homes during the Blitz. Sometimes, Ursula dies tragically, but in other lives, she commits suicide, seemingly aware that her life has somehow gone awry and must somehow be restarted. (The killing Hitler subplot reminds me a bit of the recent Stephen King novel 11/22/63.)

Some constants do remain throughout all of Ursula’s divergent lives: her love for the house at Fox Corner, her lout of an older brother Maurice, her eventual involvement (needs must!) in the chaos that is World War II on one side or another, her adoration for her younger brother Teddy, and her somewhat awkward entanglements with men who do not value her. Sometimes, it seems, she can change the world; other times, Ursula is barely able to change her own life, and when she does, it often causes drastic consequences for those she loves.

So the question remains, which life of Ursula Todd is the real life? Which life equals finally “getting it right”? In which does she she truly experience amor fati at last? And why does Ursula have this particular gift? Do we all? These intriguing questions are left unanswered, an aspect of this novel which I both hate and love. The reader gets to make meaning of the novel because there are no easy solutions for this multi-layered puzzle. I relish books that give me the necessary clues but leave me to fit the pieces together how they may; I just want to be clever enough to uncover the answers!

It’s odd. I started out loving this book, I was kinda bored by the middle, and I ended it feeling kinda “eh” and “what was the point?” Then, as I was thinking about the parts I wanted to discuss both in this review and in book club, I realized how much I had enjoyed it. There is so much to think about and discuss and suddenly I wanted to reread it! This is truly a novel that grew on me. The more I ponder its questions, the more I realize how much I adore it although my initial response would have been simply “blah.”

I think I need to go start a more careful reread of Life After Life now as I am sure I have missed so much. I want to tease out the details that make the novel come together. I plan, if I can, to chart the paths of Ursula’s different lives and find out where each diverges…I also need to come up with some more discussion questions (I’m thinking one definitely has to be about the palimpsest idea) and recipes for my much-anticipated book club night!

Kelley’s review of Life After Life

Other interesting reviews of this novel I found on the internet:

*ARC generously provided to Breezewood neighborhood book club by Little, Brown and Company. The review provided is my honest opinion as reader and reviewer.

Like Loading...
This entry was posted in 2 Dorks 1 Book, Fiction and tagged 11/22/63, ARC, book club, Life After Life, promotion, the snow child. Bookmark the permalink.

6 Responses to Life after Life by Kate Atkinson