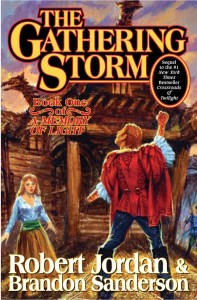 Hilariously bad cover art. Note his head. And his leg. And just about everything else. (To be fair, this is a first draft.) (To be fair, none of the finished covers are really any better.)

Thought I’d do a bit of a status update on my WoT reread. I’m up to Lord of Chaos, which is book 6 (I got slowed down cause I had to old-school read #4 – my library didn’t have it available).

Saldaea. For the first few books this was pronounced Sal-DAYYYYYYYYYYYY-a, with this weird tongue rolling thing at the end. But now it seems like they’ve dropped that and are just saying sal-DAY-a? It’s very weird.

Temaile. I have always said this as ta-MAIL. In book 3, it was said as ta-MAL-ay. Now, in book 5? They’re suddenly saying ta-MAIL. WTF.

Moghedien. OMG. So in the first 5 books in the series, this was pronounced MOG-a-deen. Starting with book six, it’s suddenly mog-eh-dee-en. ARGHHHH!

I really feel that there’s NO EXCUSE for switching up a pronunciation after 4 books. I tried to get a friend who is also into WoT to be outraged about this issue with me, and he totally refused to join me in anger:

“I don’t know, I guess pronunciations of barely used names is not important.”

Other than my annoyances, I am really still enjoying the audiobooks. It’s so convenient to be able to listen to them at work, it’s like getting an extra 8 hours of reading time every day! I also have to mention that the Nynaeve chapters from The Fires of Heaven are CRACKING ME THE HECK UP. I don’t remember the menagerie chapters being this funny, with Nynaeve going around getting in fistfights and losing. I’m also reallllly looking forward to the battle at Dumai’s Wells – it always makes my heart grow 6 sizes.

Like Loading...
This entry was posted in Fantasy and tagged epic fantasy, fantasy, rants, Robert Jordan, Wheel of Time, WoT. Bookmark the permalink.