The Paris Wife by Paula McClain

Not a bad read, but this alludes to much in Hemingway’s life (and the lives of other notable expatriates) I was unfamiliar with, so it was sometimes confusing. Hadley, Ernest Hemingway’s first wife, is the narrator and main character here in this fictionalized account of their life in Paris. I don’t find her entirely relatable (hello, earth to Hadley?…think twice about letting the mistress share your home and your bed!), but she lived in a very different time and was terribly insecure and passive, so this may account for some of it. All in all, it made me want to reread The Sun Also Rises (which has parallels here as Hemingway is portrayed as writing it during this novel) and his memoir, A Moveable Feast, which I haven’t read, and apparently is his first person account of the same time period. This is notable as Hemingway is NOT one of my favorites. I also struggled a bit with the crazy nicknames, selfish and entitled behavior of some of the characters, and how the couple all but abandon their infant son. 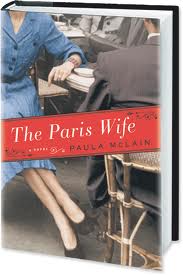 Like many of Hemingway’s own writings, the narrative is straightforward and not plot heavy (read: not action packed and at times downright slow). It does, however, feature fairly intense studies of its two main characters without reducing the many famous minor characters (ha, except the ones who deserve it…I’m talking about you Mr. & Mrs. Fitzgerald!) to caricatures. If you like historical fiction or true life accounts of famous people, this is a good pick.

P.S. This is the first book I read for the new book club I just joined 🙂