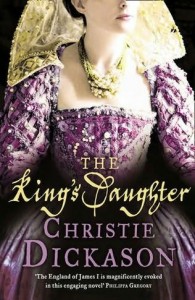 I thought I’d try something new by branching out into a novel about the English monarchy that doesn’t involve the Tudors. This one’s about James I of Scotland’s daughter, Elizabeth. And…yep, not too much interesting stuff happened to her, apparently, cause this book was booooooring. She never really…did anything. It was mostly just her whining that her father was going to make her marry someone horrible.

The other characters in the book were actually more fun to read about than Elizabeth. Her mother was crazy and her father was cruel and gay. She had an older brother who was expected to be England’s saving grace when he took the throne…but then he died. Her younger brother, Charles, was eventually beheaded after being removed as King, so it was interesting to see him as a mean, spoiled child. And for some reason, Elizabeth had a friend who was a slave who was the most interesting thing about the story, but I couldn’t understand why she needed to be in the book at all.

Plot-wise…well, nothing happened! Elizabeth lived most of her life away from court with some super-religious guardians. When she did move to court to find a husband, she didn’t really every participate in anything. There was a horrible attempt at a conspiracy theory, some fabricated involvement for her in the Gunpowder Plot, and flimsy motivations for everyone doing anything, ever.

The book ended with Elizabeth’s marriage. Seems to me that what happened after that might have been a better topic for this novel, since her husband reigned as King of Bohemia for a few months before it was taken away from him.