Son of God by Roma Downey and Mark Burnett

Gah! The typos! You’d think that Roma Downey and Mark Burnett could afford a good editor or proofreader. Or at least a better ghostwriter. I mean, I imagine them rolling in all their Touched by an Angel and Survivor money for kicks each weekend. (Maybe with Della Reese and that naked Richard Hatch guy looking on.) But no, this book is FULL of typos. 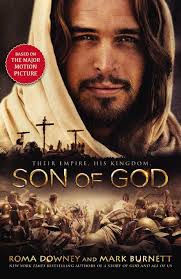 Seriously, when people let out a “collective grasp” in the first few pages of a novel, I want to throw it across the room. GRRR. There were quite a few other such distractions, but the book was a quick read, so I continued, cringing at the multitude of errors.

Overall, this was not a bad read, as it illustrates the power dichotomy between the Sanhedrin and the Roman delegation quite well. Son of God also does a fair job of describing the more human side of Jesus that novels rarely capture what with all their depictions of his miracles.

Recommend, but with some reservations.