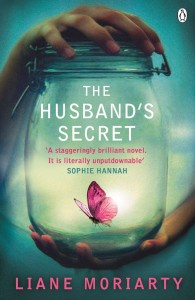 I am so glad I found this book. I was getting dangerously close to another bitter “I hate every book ever written ever in the history of ever” phase.

I mean, it could be that I completely lost sight of my Goodreads goal of late, or that I took a second job, or that the new full season of Orange is the New Black just came out, or that Zone One has been lingering around here on my nightstand for soooo damn long, (and seriously really? Who thought literary fiction in the zombie genre would be a good idea? And WHY did I keep reading it?), but I have lost my reading mojo…

I really do like reading stories of characters that are interwoven around connected events, people, and places so I did enjoy this. It was nice that they all converged upon the little tiny town with all its stereotypes and prejudices and then had to deal with all the small-town nosiness that comes with it. The book also had genuinely funny moments like the weird principal lady who dressed up as a bunny…perfect.

But when Janie’s mom gunned her car after her daughter’s supposed killer and the terribleness happened, my first thought was KARMA! And then, how tragic since it was all based on lies and Oh no! That poor kid!  And then, I considered that maybe the book is telling us that secrets can be even more dangerous for those we love. And I liked it again.

The idea brought up in our book club about what secrets are acceptable in a relationship was thought-provoking. I mean, are some secrets okay? Are all secrets a form of creating a self that isn’t truly ‘you’ and therefore essentially like cheating? The group seemed pretty split on this one. What I was stuck with (given the topics from this book and some recent very public scandal-type things that have come to light about some people we know): how do you deal with a terrible, awful secret by your spouse or child? Could you keep quiet even if it seems wrong? And do any of us ever really know what we will actually do in one of these scenarios?

Cecilia deciding that her husband’s secret must be that he was gay was pretty funny. He is really close to his mother and he likes musicals and owns an apricot shirt.

I hated the ending. I thought it was sort of a cheap copout, to not REALLY show us the conclusion of the stories and instead give us a quick “this is what happened in the future”, but also, this is what would have happened if things had gone differently, which…it’s a book. It’s fiction. Why is there a need for an alternate ending to your made-up story? It just seemed superfluous to me. Other than that I’m mostly mad that the Tess story didn’t get an ending. We see what ended up happening 20 years in the future, but not how they got there.