A Breath of Snow and Ashes (Outlander #6) – Diana Gabaldon 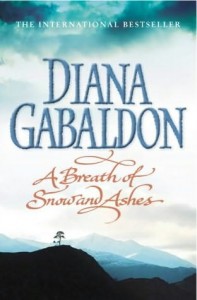 Well, things definitely happen in this book, evenm though most of it felt like long, unedited, random filler at the time.

Fergus is finally around more than the past few books but still not enough, and all he (and his whole family) really does is wander around singing Allouette, which is, I can only assume, the only French song that Gabaldon knows (it’s definitely the only one I know).

Ugh. I still am loving these books, but I think I’m ready for them to be over. I just…I love me a wordy, enormous series, but this is just getting extreme. I think what I don’t like is that all the books kind of run together and aren’t self-contained and neatly wrapped up. Things just drag on and on through books and books.. Like, Steven Bonnet was first introduced 2 books ago, and he’s still kind of lurking around the edges and popping up occasionally (that storyline FINALLY does get some resolution though). The gold at Jocasta’s is still a thing. Ian’s finally revealed his secret about why he left the Indians, but it’s been so long that I so don’t even care anymore (and also it ended up being kind of lame).

Everyone is extremely worried that Claire will get pregnant. But um…by my (possibly wrong) calculations, Claire is about 55 years old at this time. Isn’t she supposed to be a doctor and like…know how unlikely that is?

Claire’s got her own little doctor-slave in Malva Christie. Halfway through the book I had written this whole thing about how I think that Malva is going turn turn all Single White Female and try to steal Claire’s life and her doctoring skills and her Jamie and then…well, it happened.

Roger has decided to be a minister and it’s incredibly boring, and he wanders around the a lot of the book quoting scripture and whining about how his voice doesn’t work. Also…of course Roger has a Mini Cooper. Of course. He’s such a dork. I bet he would wear a bluetooth headset everywhere if he lived in present times.

Jamie doesn’t do too much at all except have long philosophical talks with Claire about the nature of war and his FEELINGS. He does rescue Claire a couple of times though, which is more like the Original Jamie I fell in love with, so it’s cool.

Lizzie, who has always been a superfluous character, suddenly gets a weird storyline of her own. I need to type this all out because I want to see if it looks as ridiculous as it sounds in my head: she starts sleeping with BOTH of the (also superfluous) Beardsly twins, can’t tell them apart and refuses to choose between them, marries them both and is now happily living in a filthy cabin (why is the horrible stench of the place always mentioned?) with both of her twin husbands and her baby.

Stephen Bonnet is still lurking around the edges, popping up occasionally, but no one really seems to care until the end when he kidnaps Brianna again. Yawn.

Arch Bug being a criminal mastermind and stealing all Jocasta’s gold and threatening her and having been important enough 30 years ago to take possession of Louis’s gold…seems like a last minute addition. Not in character and I hate it.

I’ve come to realize that Diana Gabaldon is incredibly good at making extremely boring things not seem terrible. I mean, a half hour description of Bree digging a hole or Jamie fishing or Claire stitching up someone’s foot – these are things that should bore me, but they don’t. But I like weird things sometimes, so I feel like at some point there should’ve been an editor to be like “hey, maybe we don’t need 5 pages of you lancing a boil.” Is there an editor for these books? I’m seriously starting to wonder, because the disjointedness, the rambling…is there no one left to reign in Diana Gabaldon?? I feel like GRRM should call her up and set her straight, but he’s probably too busy getting drunk with fans and not finishing ASoIaF. She’s also REALLY good at writing scenes that are juuuuuust disturbing enough to make me squirm, but not bad enough to make me put the book down. It’s like an art for her.

With each book after number two, I find myself having to mention in my review that “I still love Jamie and Claire, BUT…”, and…I’m starting to get sick of even Jamie and Claire, really. I…enjoyed the book, I really did! But…I just want it to end.