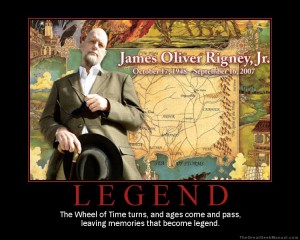 The new Wheel of Time book should be out sometime this year (fingers crossed), so I’ve started my annual reread in order to brush up and be prepared. This truly is an epic fantasy series, comprised of 14 books, so a reread takes a loooooong time. I was worried that I’d neglect this blog while I read WoT for the next six months, so I got the idea that I would try out the audiobook versions. That way, I can read other books at night, and listen to WoT all day long during work and on my hour-long commute every day. I’ve been getting them from the library and it’s been working out great, except…I’m not actually reading anything else. I abandoned my Sisterhood of the Traveling Pants reread because I’m just so into WoT…again. Blah.

Now, I don’t really intend to review WoT here. It is SO enormous and scary that my review isn’t going to make anyone decide to read it, and the series has been analyzed to death on sites like this, and I don’t really feel that there’s anything new to say. The series appeals to a certain group of people, and that group of people have already read it and joined a forum to discuss theories. 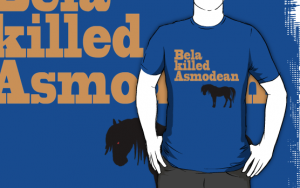 The Creator made the world and included a prison to hold the Dark One (devil). In this world, some men and women can channel the One Power (magic). 3000 years ago the Dark One’s prison was broken, and Lews Therin Telamon, called the Dragon, tried to seal him up again. The Dark One was resealed, but in the process he tainted forever the part of the Power that men could use, making all the male channellers go insane and break the world – literally. Present day, the technology lost after the Breaking hasn’t yet been regained and it’s sort of a primitive, medieval setting. Only women can channel now – male channellers aren’t tolerated because they eventually go insane and start destroying things. The prophecies are coming true that the Dragon will be reborn in order to fight the Dark One and save humankind. The story follows some village boys and girls as they try to get the Dragon to stay alive long enough to save the world in the Last Battle.

This was my very first foray into the fantasy genre, and it’s still my favorite. There’s a lot of action, the magic system isn’t annoying or difficult to understand, and is not the main focus of the story. Honestly, the more I reread it, the more I suspect it’s supposed to be some sort of enormous study on the relationships between men and women – that is a huge theme of the book. Anyway, you follow the Dragon Reborn (and others) as he learns how to rule, how to conquer nations who are under control of followers of the Dark One, and how to deal with his madness from channeling the tainted male half of the Power. These teenage villagers that I mentioned are fighting to remake and save the world, and it is awesome. 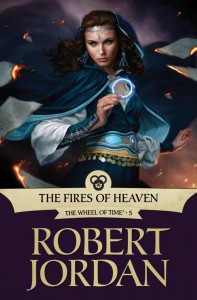 OK, so the audiobooks. These books are read by Kate Reading and Michael Kramer – she reads the women’s POV chapters, and he reads the men’s. They’re British, of course, and they do tend to over-enunciate, but I’m really enjoying the voice acting so far. It can be kind of jarring when they switch POVS, though.

He does different voices for different characters, and to a lesser degree so does she. I don’t always agree with the way they choose to portray certain characters (Perrin? Min?) but overall I think they both do a really good job.  Though Michelle walked in one day as I was listening and immediately said Kramer was expressionless and terrible, so YMMV, I guess.

Also, Kate Reading’s voice is so pleasant that I think I’d enjoy listening to her read a grocery list. I adore the way she pronounces words.

By the way, it’s worth noting that Robert Jordan is deceased, and still is releasing books faster than George R. R. Martin.

Like Loading...
This entry was posted in Fantasy and tagged epic fantasy, fantasy, Robert Jordan, Wheel of Time. Bookmark the permalink.