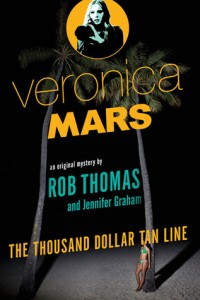 Story time! Sometimes at work there’s a birthday or a going away party or something, and someone brings in a cake. The cake is always from a bakery, and is covered with thick, fluffy white icing all decorated in swirls and prettiness. And this is always more exciting to me than it should be, because I really love buttercream icing – mine is pretty much a canned icing household. So, I wait in some sort of line and finally get my piece of delicious-looking cake. Yay! I take a bite, and – BAM! it’s actually whipped cream icing and I cry a tiny little tear.

This book is whipped cream icing.

The mystery was garbled and unnecessarily complicated, full of red herrings that went absolutely nowhere, so that sucked. But the real tragedy was the lack of humor and cleverness. When dealing with the Veronica Mars universe, I should walk away thinking about how adorable and wonderful Veronica and Keith are, but instead I was left feeling disappointed and kind of irritated (which is also how I feel when I’m tricked into eating whipped cream frosting).

And why isn’t this book written by Rob Thomas, anyway? He’s already a published author, and he seems to have written a good amount of the VM TV episodes, so…I don’t get it. Jennifer Graham did an OK job, I guess, but it doesn’t look like she’s written any other fiction, so I’m somewhat inclined to blame this book’s crappiness on her just not being able to incorporate that Veronica Mars sparkle.

Audiobook notes:
Narrator: Kristen Bell. I thought that hearing the actual Veronica Mars tell the story would help me get immersed into Neptune again. Well, it might’ve if I’d enjoyed the story. As always, Kristen’s a great voiceover actress, though her attempts at some of the male voices were maybe a little lacking. I did hear traces of Enrico Colantoni and Tina Majorino in her portrayals of Keith and Mac, though, which was kind of awesome. But Wallace, for instance, wasn’t great.