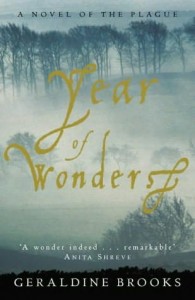 So, Anna lives in a tiny and poor English town which was infected with a plague in the 1600s. It’s really interesting to see the way the plague began, spread, and was eventually stopped. There are Puritans and witch hunts. Anna lives a really, really depressing life, losing everything she ever had both before and during the plague. The town makes a pact to quarantine themselves, essentially causing the deaths of most of the town by the end, but also probably saving the lives of a lot more people outside of town by not allowing the plague to spread. That part of the story is true, by the way – the town of Eyam quarantined itself in 1666.

I found myself wondering exactly what type of plague this actually was, and it turns out that I’m dumb and apparently there’s only one type – bubonic plague (and good lord, there are still isolated cases of that popping up throughout the world). Anyway, then I got stuck in a wikipedia loop for hours reading about Typhoid Mary and yellow fever, so I feel like this book educated me a bit.

Year of Wonders was a really great story, though it started to unravel a little in the end…I don’t think that the story really NEEDED a crazy witch woman, or the big reveal about the rector. And the ending was a little odd, but since it wraps up the story nicely for Anna, I’ll forgive it. This was the best book I’ve read all year. Which might not mean too much since my other reads for this year have basically just been YA fantasy, but, still. Next up, I think I’ll read March by the same author – it’s a continuation of Little Women from the father’s point of view. How cool is that!!

Audiobook notes:
Narrator: Geraldine Brooks, the author. She has a very strange voice that I really never got used to. It alternated between being very high and almost squeaky, and low and gravelly and broken, while ALSO somehow sounding like she might fall asleep at any moment. So combine that with her English accent, her (to my American ears) strange pronunciation of some words, and the old-timey words, and I wish I’d read this one on my Kindle instead of as an audiobook.