Otherwise known as the last, most incredible book I read. Ooh, man, I REALLY liked this one. 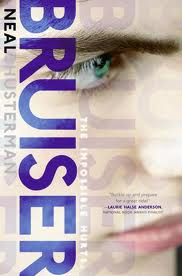 Twins Tennyson and Bronte, who are having some issues at home, disagree about Bronte’s new boyfriend, Brewster Rawlins. Tennyson feels his sister can do better than the big, dumb bully from the poor side of town. He is also afraid that his parents are too preoccupied with their own fighting to notice his sister’s poor choice. Except Bruiser isn’t really what Tennyson or anyone else thought he was; he just seemed to fit into every cultural stereotype dreamed up by his judgmental peers. In fact, the popular jock Tennyson is more of an intimidating force than Bruiser ever turns out to be, so there is an inherent lesson here about judging others based on their appearances.

At first, I feared I could see this plotline coming a mile away; I thought this would be a book about the traumas of child abuse and bullying. You know the kinds of books I’m talking about: they’re sad, contrived, and preachy in a Save The Children infomercial, shove-the-lesson-down-the-reader’s-throat kind of way (I’m looking at you, Wonder). I guess, technically, this was a “message” book after all, but Shusterman spins it into much more than that with an added, and heartbreaking, twist which I didn’t see coming (no spoilers here, although I’m dying to talk about it, so everyone please hurry up and read this, so we can discuss!). I also loved how seamlessly the magical elements were woven into Bruiser without seeming forced or over the top. It is just that sort of fantastical wrinkle in realistic narratives that allow authors to really delve into human foibles and flaws.

Unique and profound, this book espouses the idea that protecting those we love might come at a personal cost. I particularly like teen stories with real, but not forced, lessons for real life. These “big message” stories seem all too rare in today’s teen literature. After all, so much of YA tends toward the paranormal, dystopian, love triangle nonsense. The rest reads like what it is, a bunch of grown ups writing to try to instill moral lessons in the young. Don’t get me wrong – I like many of those kinds of stories too, but I LOVE it when I read examples of young adult fiction that proves to be so much more than that. Bruiser is one of the best.

Like Loading...
This entry was posted in Young Adult and tagged Bruiser, magical realism, Neal Shusterman, YA. Bookmark the permalink.

2 Responses to Bruiser by Neal Shusterman