This one makes me sad …like majorly, epically, soul-crushingly sad. And not in the way you might think. After all, it’s the story of a boy who has major facial deformities, how his family tries to protect him, and how mean kids are when he finally starts school.

And sure, all those things make me sad. 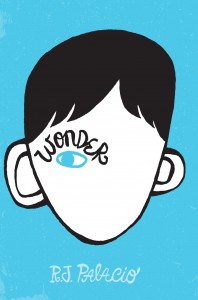 What makes me saddest though is that I didn’t feel MORE …something. Weepy, touched, inspired…I’m not sure what I expected, but SOMETHING would have been nice. And a lot more of it. (I’m pretty sure I had the exact opposite reaction to this book that I was supposed to. Again, I AM the devil.)

August apparently has some form of Treacher-Collins syndrome which leaves him with a face that looks kinda melty and mushed-up. He gets stared at and teased a lot; even well-meaning adults do a double take or involuntarily startle when looking at him. Auggie seems like a genuinely cool kid and as a reader I can’t help feeling bad for him. Still, though, as bad as his story seems, I feel like it could’ve been SOOO much worse, you know?

Sure, being chased around by big mean kids at camp and teased at school is awful. Overhearing your supposed best friend say cruel things about you behind your back is surely crushing.  But I feel like lots of kids go through similar things and deal with it much like Auggie has to. (And a hidden part of me wants to shout: well, at least he HAS friends….) Of course, his bullying is probably worse in that he can’t help or change his face, but he also seems to have had the upbringing, support from his family, and general pluckiness of character to deal with those things better than many children might. Instead of making him different, I feel like the torment he endures by other bigger, meaner kids somehow makes him the same as normal-looking kids, you know? And where Auggie has friends who surround him and protect him when he’s dealing with a crisis, many kids just fade into the background because they don’t have that support network or wherewithal in themselves to survive it.

I guess my point is that it is hard to stand up to bullies; most kids in my experience wouldn’t do it. Not every new kid, particularly one who appears so outwardly different, is going to have a kid come sit with him at lunch on the first day of school. Not every bullied kid is going to be recognized for his courage at the end of the year. The whole be-kinder-than-you-have-to movement he inspires at the end seems kinda empty as far as causes go. I almost feel, and don’t kill me for saying this, that Auggie, because of his face, was always kept more visible; as a result, he was also easier for kids to rally around and adults to protect. He’d never be the bullied kid who hides in the shadows or falls through the cracks. All in all, the book makes me sad but not so much for Auggie. As a reader I somehow always know he will be okay…it makes me sad for the invisible bullied kids like my own son who deal with this issue every day without any support from kids or adults around them.

Like Loading...
This entry was posted in Children's, Fiction, Young Adult and tagged bullying, kid lit, YA. Bookmark the permalink.

8 Responses to Wonder by RJ Palacio