Welcome to a new feature here at bookdorks! We’ve both read the same book and will simultaneously give our opinions of it. Hopefully this will be interesting because we have pretty different tastes in books. Actually, we almost always disagree. Plus, you’ll be able to compare Kelley’s rambling criticisms with Michelle’s blathering book-length reviews! 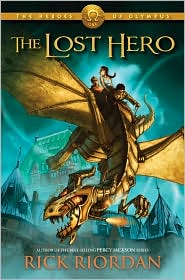 So, The Lost Hero. I didn’t even know this book existed until Michelle mentioned buying the sequel a few weeks ago. And, I wasn’t that excited to read it, either…a Percy book that’s not actually about Percy? Um, bleh! But I got sucked in from the first chapter, and I actually like this better than the original Percy books. It’s strange to think that I didn’t even miss Percy and Annabeth and Grover and the rest…Riordan is really good at creating characters that I immediately care about. Jason’s an awesome character, and I really enjoy Piper also.

Plus, the whole mysterious “Jason is Greek” thing??? AWESOME.

Something I’m not wild about is…well, the existence of this book. Percy and co. already saved the world several times in the last series, and now once again there’s a big prophecy that is going to mean 5 (I assume) more books, once again they’re setting off on a journey, and once again every. single. place. they visit is filled with monsters and people from legend. It just seems a bit…contrived. Although the story is good (very good), it’s becoming sort of formulaic.

I liked this book even more than the “Percy Jackson and the Olympians” series. Maybe it is because the backstory is so well established by this point or that I like these three characters (and the way they share the primary story) better, but to me, TLH reads more true to actual teenagers and their conflicts. The banter between Piper and Jason as they (re-?) establish their relationship and how Leo feels like a third wheel seems plausible as does the way both Leo and Piper have to take control and “save” their respective houses at Camp Half-Blood. Jason’s indecision and struggle to fit in where he doesn’t belong seems both relatable and endearing, making me glad that he, not Percy (more on him later), must be the leader of the Prophecy of Seven gang.

The Lupa and Gaea arcs felt like reasonable retellings of ancient Greek & Roman myths which I really appreciate. Nothing directly contradicts what mythology geeks already know of these myths and instead, the new twists simply seem like modern extensions of the original stories. I also LOVED the flamboyant Aeolus of the Olympian Weather Network chapters and the Thalia Grace as sister subplot. But best of all is…

Percy! I know all about what Riordan said about Percy’s story being over after the PJO series and that he’d write about other half-bloods and not Percy, but somehow that never felt possible. (See link to his interview here…(http://www.rickriordan.com/about-rick/faq.aspx) He does hint that Percy might appear in others’ stories in a sort of cameo role, but it just seems that there was too much of Percy’s story left to tell for that to be true. In fact, throughout The Lost Hero, when the characters repeatedly allude to Percy, and his unexplained absence, we all know that it has something to do with Jason’s untimely appearance. The questions which arise in The Lost Hero make it clear that Percy HAD to come back. He HAS to be one of those seven demigods in the new prophecy (after all, they have to be the seven best of both camps, and throughout the first series all we hear is how he’s so great, so how could he really be left out? I’m figuring it will be Jason, Leo, Piper, Percy, Annabeth and two new Roman camp heroes we’ve yet to meet who will set out on the new quest.) So that begs the question: how committed would Riordan be to his statement following The Last Olympian that for Percy, at least, “all good things must end”?

Thus, after reading TLH initially in May, and taking a brief detour into Riordan’s less enjoyable The Red Pyramid  and Throne of Fire since, I’ve been chomping at the bit to get to The Son of Neptune…(Honestly, who else could that be but Percy?) Either way, I do love this book, so TSoN better not disappoint. Stay tuned for a “2 Dorks, 1 Book” review of that novel coming soon!

2 Responses to 2 Dorks 1 Book: The Lost Hero by Rick Riordan