A Slave in the White House: Paul Jennings and the Madisons — Elizabeth Dowling Taylor 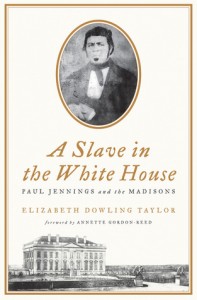 Ugh. I hate when my book club chooses nonfiction. Not because I dislike nonfiction per se, but simply because I want my pleasure reading to be…well, pleasurable. So often, nonfiction is too much like work! I do like NF sometimes though, mostly memoirs and some biographies, and while this technically falls in that genre, I didn’t like it at all. It was very dry and it felt like a chore all the way through. It seemed like something I’d read for college but not in a good way. It just wasn’t very well written.

Repetitive, boring, and not incredibly enlightening, A Slave in the White House: Paul Jennings and the Madisons is poorly named and not a fun or even educational read. Instead of telling us the somewhat interesting story of this one former slave and his presidential connections, the narrative meandered around and through the stories of every person Jennings ever met or talked to AND managed not to give many details about the man himself. Of course, that is probably understandable given the lack of written records for slaves at the time, but to make up for this, Taylor simply repeated the same anecdotes over and over and digressed into stories about nearly every contemporary of Jennings — James Madison, Dolley Madison, Daniel Webster, other slaves, etc. — throughout his entire life. Then, she speculated on what his reaction to these things would be “If Jennings was around…” or “Certainly Paul Jennings would have celebrated…” UGH. While I can see why the story needed to discuss Mr. and Mrs. Madison, (after all this WAS the first White House memoir), although…

President Madison seemed to have no redeeming qualities or traits at all…oh, except that he wore outdated clothing, told a joke or two, and hypocritically fought for freedom of all men while simultaneously owning slaves. NONE OF THIS WAS NEWS! I expected inside interactions of Paul and Madison IN the White House. Instead we just get six different reported ways the famed portrait of George Washington was saved when the British attacked Washington during the War of 1812, NONE of which involved Paul Jennings (or Dolley Madison as the story goes).

The first First Lady to carry that moniker came across as a bitch who went back on her husband’s promise to free Jennings after his death. Her defining characteristic seemed to be an overwhelming need to entertain guests lavishly (all while taking credit for the labors of her slaves). Then she broke all her promises to free the other slaves or even sell them to masters they approved of because she was in a financial bind because her son was a scoundrel. She still ended up dying penniless and taking handouts from Jennings, her former slave!

It can’t be denied that slavery was wrong and a terrible institution tolerated for too long in American history. That said, I’m not sure America would ever have been the same country without it. I also won’t deny that we seem to celebrate some hypocritical bastards as founding fathers. Still, vilifying famous men who helped to shape this country into what it is today several hundred years after the fact doesn’t make up for the great wrong that was done to other human beings. The point of this biography then seems flawed. Repeatedly calling Madison ‘the sage” while pointing out his errors doesn’t do the memory ofJennings or other former slaves any favors. Repeatedly talking about what a champ Jennings was for what he endured, how industrious he was, and how dedicated in teaching himself to read and write, hold his tongue, not run away, etc. seems frightfully shortsighted. Jennings and Madison were both human beings rife with human faults. Making one seem like an unsung hero (though surely he did some incredible things) at the expense of the other doesn’t seem to fix anything. I’d rather just read a straight bio of Jennings without comparing his deeds to the famous white men around him, you know?

For about half the book I hated that the only extant photo of Paul Jennings has him all dandified up in a fancy suit. It felt like he was trying too hard to fit in a white man’s world. I’d have preferred to see one of the real Paul Jennings, maybe with his family. (Since they were still slaves for many years after he was freed, I guess that would never be possible.) However, once I learned that he went and sat for that portrait as one of the first things he did as a free man, I did change my feelings about it a bit. Still, this book was completely dull, not revelatory, and the best parts of it were the stories of what his descendents have done in the generations since being freed from slavery. Blargh.