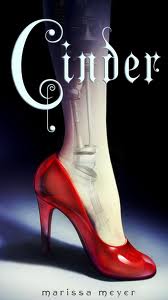 I was REALLY looking forward to this one for a long time and even hoped to get it for my birthday…alas, no giftage of the book arrived come January 17, and as school is out  (hooray for summer vacation!) and my birthday passed six months ago, I finally purchased it for myself. And devoured it in one day.

Cinder is scrumptious, fairy-tale fun. I really liked it. (I have to admit, though, I DID figure out the novel’s main plot twists 1/4 of the way through and STILL stuck around to finish it.) The revisionist Cinderella premise works much like you’d expect, at first: Cinder is orphaned and lives with her adoptive mother and two sort of stepsisters (only one is evil) in New Beijing (old Beijing and much of the rest of Earth having been destroyed several hundred years back in World War IV). Cinder is overworked and greasy and a CYBORG. Apparently, she was in a horrible accident as a child and her irreparable human bits were replaced with machine parts. No worries though, because Cinder doesn’t remember much of her past and is now this awesomely gifted mechanic who can fix all sorts of electronicky stuff. Turns out the prince needs his android fixed and he meets her and likes her, although she can’t reveal what she really is because cyborgs are sub-human and all.

What I liked: clever homages to the old Cinderella story particularly the dropped shoe (foot?) and the ashes which play in with the childhood “Ring Around the Rosie” rhyme (interestingly enough about plague both here and originally). Also, the evil brainwashing queen and the discrimination of sub-human people (cyborgs, androids, Lunars) made the story seem modern and less cutesy. The letumosis plague adds urgency and amps up the drama making the story about more than just Cinderella finding and meeting her prince…it becomes less a happily-ever-after and instead the more dramatic save-the-world kind of story.

What I didn’t like: the unresolved ending that sets up a sequel. I mean, I knew this was a series because it says Book 1 of The Lunar Chronicles under the title, but cliffhangers are still a pet peeve of mine. Even serial books should have a solid and definite story arc that includes a beginning, middle, and end.

Like Loading...
This entry was posted in Fairy Tales, Fiction, Royalty and tagged Cinder, fairy tales. Bookmark the permalink.

One Response to Cinder by Marissa Meyer