OK this is cool.

I haven’t mentioned here yet that I also run a nailpolish blog, so I’m a total nail nerd in addition to being a book nerd. And today I read that China Glaze will be releasing a Hunger Games-themed collection in March! Hopefully this is legit, because the original post has been removed. OPI’s been doing celebrity and movie-themed collections for the past couple of years, so it’s awesome to see China Glaze honoring a book series! Well, it’s really in honor of the movie release, but I’m going to pretend it’s for the books instead because that’s way cooler.

**editing to say that I think this is fake. We’ll see, I guess…the swatches look professional to me, but the captions do not. 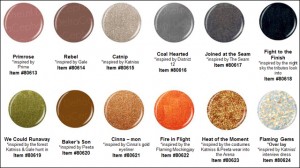 Image via All Lacquered Up, via Delta Cephei.

Like Loading...
This entry was posted in Random Rants and tagged China Glaze, Hunger Games. Bookmark the permalink.