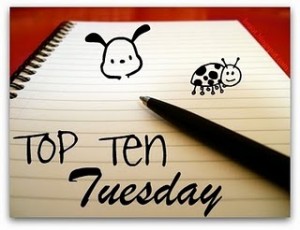 Top Ten Tuesday is a feature hosted by The Broke and the Bookish.

I’m seeing a theme here, I hate books that scare me! Also, I know I’m a day late on this one – my internet connection was being craaaaaazy last night!

1) Eye of the World (Wheel of Time series), by Robert Jordan. I read this against my will about 10 years ago, and I did NOT want to read fantasy. At all. Ever. Fast forward to today, and I’m a moderator of a Wheel of Time message board, I’ve read the series like 15 times, and I am salivating at the thought of the newest (and last) book to be released next year.

2) Jaws, by Michael Crichton. Sharks scare the living crap out of me.

3) A Tale Dark and Grimm, by Adam Gidwitz. OK, I’m totally into teen fiction, but this was more children’s fiction.

4) Marie Antoinette: The Journey, by Antonia Fraser. This was the first real non-fiction historical biography book I ever read, a genre which I really like now. I borrowed it from B&N when I worked there (really cool that they allowed us to do that), and it’s a very weighty volume. I kept it so long I eventually felt guilty and bought it.

5) Twilight, by Stephenie Myer. Ugh. Vampires???? I just don’t get the vampire obsession. I read this series entirely because I’m very easily swayed by popular opinion. It is the same reason I will eventually read The Girl Who Kicked the Hornet’s Nest.

6) The Corset Diaries, by Katie MacAlister. I don’t generally go for chick-lit/romance stuff like this.

7) The Eyes of the Dragon, by Stephen King. I had no idea that King wrote non-scary stuff. I spent the whole book expecting to be terrified, but I LOVED it.

8 ) Marked (House of Night series), by P.C. Cast. Aaaaan even after reading Twilight, I’m still not into vampires, but Michelle convinced me to read this series anyway. Meh.

9) Sybil, by Flora Rhea Schreiber. OMG, I read this book when I was like 12, and I’m STILL on the lookout for signs that I might be developing another personality. It was just terrifying to me, and I think I’m scarred for life now. I vividly remember certain scenes in this book even now, reading it was a terrible idea.

10) The Lovely Bones, by Alice Sebold. The themes of this book were just too distressing for me. I like to escape into a book, not to get sad and depressed.