The Deal of a Lifetime by Fredrik Backman

Let me first say I ADORE everything I’ve read by Fredrick Backman. Everything. Even the ones like Britt-Marie Was Here which wasn’t my favorite of his, didn’t make me ugly-cry like A Man Called Ove or And Every Morning The Way Home Gets Longer and Longer, but I still could appreciate and enjoy. Until now. Now there is The Deal of a Lifetime and I can’t say I love everything Backman anymore. 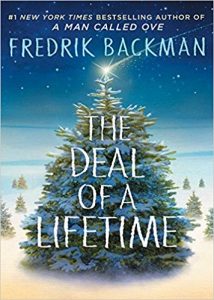 By this I mean, I really didn’t like it. I’d have to say Ove and Every Morning are probably two of my favorite books ever, so I had such high hopes even for this being only a short novella. Yet, this story just didn’t grab me. I guess when it was originally published, The Deal of a Lifetime was serialized in a newspaper in Backman’s hometown in Sweden and I guess I could see it going over better in that format. Maybe waiting for each installment might make snippets of this more profound? Yeah, no. Even then I don’t think so.

As it is, though, I wanted more character development of the Scrooge-like dad, the distant son, the sick girl, and especially the woman in gray (such an unusual personification of death or its harbingers!). In fact, I feel like the woman in the gray sweater is really the way I could have fallen in love with this book completely, but instead it just felt like she was merely a potential thread that was dropped. I do realize character development is one of the first things to get cut in a novella-length work, yet it didn’t bother me at all in Every Morning. There, those same character development gaps seemed whimsical and fillable by a reader’s own personal experiences. Here though, I needed more. I wanted to care about the sacrifice being made in this grand entrepreneur’s “deal.” Instead, I felt like I was left with caricatures of real figures with not enough substance and a forced and too-cute for words Christmas-themed redemption plotline more suited to a Hallmark movie.

Like The Clothes Make the Girl (Look Fat?), this book was a birthday gift to me; I only wish I could get my mom’s money back! I have Backman’s latest full-length novel up next on my To Be Read list following The Handmaid’s Tale. Please Beartown, don’t let me down.

2 Responses to The Deal of a Lifetime by Fredrik Backman