A Thousand Miles from Nowhere by John Gregory Brown

A Thousand Miles from Nowhere features a former teacher fleeing the destruction of Hurricane Katrina who ends up at a roadside motel in a fictional town in Virginia. While there, we learn that Henry Garrett is fleeing not only the hurricane, but also the self-made wreckage of his life. He befriends the recently widowed Indian proprietress of The Spotlight Motel where he finds himself. Along the way, he hopes somehow to find his estranged wife and to calm the ghosts and voices in his head that are plaguing him. And then, as if his life isn’t already enough of a full-blown disaster area, Henry then accidentally muddles his way into committing vehicular manslaughter. Oops! 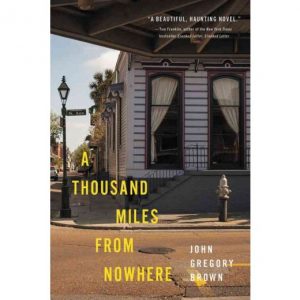 Written by John Gregory Brown, a professor of creative writing at Sweet Briar College, this is Southern fiction in all its slow-paced, character-driven, quirky glory. While I’m not typically a fan of this genre because it can feel forced, I enjoyed A Thousand Miles from Nowhere well enough as I could see the places and people described quite vividly. That said, I didn’t feel that I was being dragged through every Southern stereotype and fake accent the author could throw in to give it an “authentic” feel. I appreciate that the author had talent enough to draw his characters and small town settings vividly and believably enough that they came to life without relying on all too familar and overdone Southern tropes.

I think my only complaint about this one is that while I know it is Henry’s story of plodding through his emotional struggles, I really wanted more details on the Hughes family. Throughout the book, Henry became attached to them unexpectedly through tragedy and so did I; I craved more of their moments on the page. I also really wanted more New Orleans aftermath moments as I’ve not read many novels using Hurricane Katrina as the backdrop. I guess I do have one more complaint…this one was REALLY slow to get started and I’d already slogged through half of the book before I truly cared about any of the characters or their problems. Because of that, if it hadn’t been our monthly book club read, I may have actually given up on this one before I finished as it didn’t instantly hook me.