I liked Gone Girl so much in book club that I decided to add this in for my “book by an author you love that you haven’t read yet” category in the Popsugar Reading challenge. It is one of the author’s earlier books, but not her first, so I couldn’t count it as a debut. (I did think of moving it over to the 500-page category though.)

Mild spoilers ahead, I suppose. 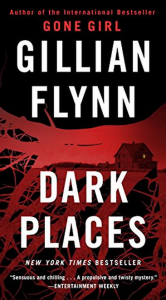 But here is what is not a spoiler: I didn’t really like it. The main character Libby Day, while sad, isn’t an interesting character to read about. I don’t enjoy her perspective or her whining. Yes, she has had to live with a terrible tragedy. I just don’t care to watch her pursue terrible life goals (i.e. exploiting her infamy for money so she won’t have to work) for an entire book.The author establishes very early on that since Libby was only a child witness, her testimony against her brother, the only suspect in the murder of her entire family, was coached. And then what? We are forced to struggle along while Libby sells off her childhood memorabilia for money and talks to old witnesses to try to solve an age-old crime. Except, I don’t really care about the crime. Or Libby. Or her wrongfully imprisoned brother Ben. Or whodunit, actually, which makes this murder mystery thriller a total fail.

Bleh. I had planned to go back and read Sharp Objects, Flynn’s actual debut novel, but now I’m rethinking that. There might be a reason Gone Girl was the first book we’ve heard about from her. And I hear this is soon to be a movie, and NO.

Like Loading...
This entry was posted in Challenges, Creepy/Weird, Fiction, Film Based on Books, I Want My Money Back!, Mystery, Re - releases and tagged Dark Places, Gillian Flynn, myster. Bookmark the permalink.