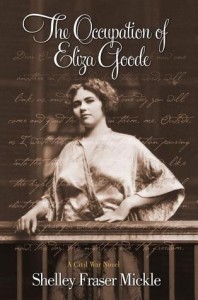 Oh, sigh. Starting 2015 out in true Kelley fashion, I hated this book. I came across The Occupation of Eliza Goode while looking for a nice historical novel, and it sadly fell flat for me.

The book is told by two different narrators, one in the present and one in the past. In the present, Susan gets a call from her mysterious cousin Hadley who wants her to read all these letters she found that were written by a young distant relative of theirs. I did not care about this storyline at all. Hadley might be a huge liar and might have a terrible disease. Yawn, let’s get to the historical parts!

So in the past, Eliza Goode is a prostitute who runs away to join the Civil War, or something, because she was sold as a courtesan to some dude who was old enough to be her father. It’s super boring, and it shouldn’t be, because the Civil War is a time period that I generally really love. I hated the writing, which seemed disjointed and passionless, and never really was able to draw me in, and Eliza’s story was rather drawn out and boring – I stopped reading on page 109, about 30%. I don’t understand the wonderful Goodreads reviews this book has, but I’m willing to accept that maybe it’s just me. Oh well.

5 Responses to The Occupation of Eliza Goode – Shelley Mickle (DNF)